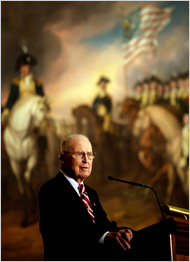 If you had to point to one person who helped the global population surge over the past several decades to nearly 7 billion rather than succumbing to mass famine, as was widely predicted (and, indeed, has been predicted throughout history), a person who well understood the paradox that population growth was both the reward of his life’s work as well as the problem that necessitated it, that person would likely be Norman Borlaug, the most important plant scientist behind the Green Revolution, who has died at the age of 95.
Read this extremely well-done obituary, by Justin Gillis. A few of many, many highlights:

We have a few things to say in SuperFreakonomics about this sort of triumph, in which a seemingly unyielding problem is addressed, almost simply in retrospect, to great worldwide benefit. That doesn’t mean there won’t be complaints, of course, about unintended consequences and the plight of the minority whose boats didn’t rise with the tide. To his credit, Gillis gives those folks a voice in the obituary as well.