One Nudge Does Not Fit All 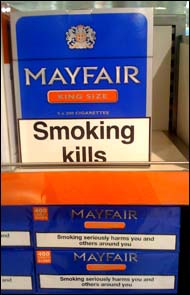 The BPS Research Digest blog reports that those dire health warnings on cigarette packs may actually drive some people to smoke. Psychologists interviewed 39 student smokers about the importance of smoking to their self-esteem. The students were then divided into two groups and shown two different sets of cigarette packs — one set with death-related health warnings and one with death-neutral warnings.

Among students who consider smoking important to their self-esteem, those who viewed the death-related warnings reported more positive attitudes toward smoking than students who viewed the death-neutral warnings. “In other words, for smokers who derive a self-esteem boost from smoking — perhaps they see it as a key part of their identity or they think it makes them look cool — a death-related cigarette packet warning can have the ironic effect of making them want to smoke more, so as to buffer themselves against the depressing reminder of their own mortality.”

When my husband first read about the cancer connection in the Times, he stopped smoking. That was umpteen years ago. I guess a good question is, what makes for self esteem. For my daughter, I have noticed that having a car has made a difference. Seems to me, however, that one should not need smoking, driving, coffee to feel that sense of self-worth. Perhaps a real sense of accomplishment does the trick. This varies and is not the same for everyone. I just had a conversation recently with a colleague and she admitted that she does not have my aspirations. I explained that I did not have them either at first. Just started with an interest in making a real contribution to my field.

"so as to buffer themselves against the depressing reminder of their own mortality."

I think they are missing the point. Nobody smokes extra to convince themselves that there is no warning, or that they don't believe it.
If it's important to your self esteem, then it's all about image. Laughing in the face of death is cool, in sort of a post-punk rock way.

Driving fast kills-- and that's precisely why teens do it. Risk-taking behavior is common in many species... not just ours.

Thailand has the interesting policy of posting really nasty images of smoking-related diseases on their cigarette packages. I wonder how that would change the study. My guess is that the abstract thought of death could be considered cool for some smokers, but the vision of diseased flesh would be much less so.

In my time in the country, I saw very few Thais who smoked, but the images didn't seem to slow down the European smokers!

WTF? on this whole article.

#3: I'm 23 years old...but I have always driven fast and I don't do it b/c it's a risky behavior...most likely b/c I'm impatient and like to get where I'm going faster.

Is there a possibility that the people who smoke for self esteem are encouraged by the fact that they are "cheating death" by smoking the deadly cigarettes and not instantly dying?

I think teens are just really, really bad at recognizing the importance of future consequences resulting from their actions now, because they haven't had the chance to experience a lot of averse consequences as a result of their actions from a long time ago. It totally screws up the way they value things like health and longevity in relation to social acceptance.

A study of 39 people, of whom a *percentage* (not the whole group) had smoking tied to their self-esteem. And we're supposed to generalize from this to ... what conclusion, exactly? Not a landmark study, by any stretch of the imagination.

The most extreme example of this is "Death" cigarettes manufactured in the UK in the nineties. The packet was all black with a skull and crossbones and the word Death emblazoned across the top. They were good smokes too.

A point needs to be made here. If one studies 39 people in depth, comparing and contrasting who they are, what they do and why (motivationally speaking) and then you arrive at a set of conclusions - the aim need not be to generalize, but to specify typical character types and qualities they share in common.

I agree with DrS. That's the psychology.

Sample of 39? Are they serious?

I smoked back in the old High School days for social acceptance from a group of kids that I thought were cool. They did it, I knew it was bad, but I also knew doing just a little bit of it wasn't going to hurt me health wise all that much. It helped to cement my acceptance into the group. The trade-off was a little damage, but social acceptance! Once I was in the group I just stopped doing it.

In Brazil health warning on cigarette boxes read: "CAUTION: smoking lowers your sex drive." I've always wondered what the impact of such a label might be in the US.

In the UK, there are warnings saying "Smoking may cause impotence". You can probably youtube for the accompanying ad campaign.

Sadly, it's mpossible to know how effective it is, since it coincided with the smoking ban in bars - which has dramatically reduced smoking in the UK.