A Contractual Solution to Citizens United

Now that the Supreme Court has freed corporations to expressly advocate for the election or defeat of federal candidates, many pundits feel that is simply beyond the power of Congress to constitutionally curtail the corrosive potential of corporate speech.
But Bruce Ackerman and I just published a piece in the Washington Post arguing that Congress can constitutionally prohibit corporations that are federal contractors from paying for ads “endorsing or opposing a candidate for public office.”

A 2008 Government Accountability Office study found that almost three-quarters of the largest 100 publicly traded firms are federal contractors. If Congress endorsed our proposal, these companies — and tens of thousands of others — would face a stark choice: They could endorse candidates or do business with the government, but they couldn’t do both. When push came to shove, it’s likely that very few would be willing to pay such a high price for their “free speech.”
The Roberts court is skeptical — to put it mildly — of campaign finance restrictions. But it is still highly unlikely that the justices would strike down a law targeting federal contractors. All nine recognize that Congress may restrict free speech when there is a significant risk of corruption. That risk is obvious when corporate speakers are simultaneously doing business with the government. 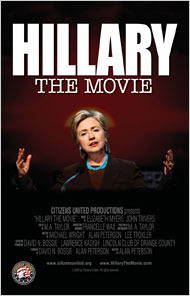 Many smaller firms would retain their full rights to expressly advocate for the election or defeat of candidates. The very corporation at issue in last week’s Citizens United decision falls squarely in this category. The corporation that produced Hillary: The Movie had no federal contracts and would thus remain as unconstrained as ever.
More importantly, many news organization would remain unregulated (or could easily comply) because the Fourth Estate doesn’t sell goods or services to the government.
Our Solicitor General, and former Harvard Law School Dean, Elena Kagan, had a monumentally difficult task at oral argument before the Supreme Court when she tried to distinguish books from pamphlets in an age of pdf documents:

[At oral argument,] Ms. Kagan disavowed a statement that a government lawyer made when the case was first argued in March. The lawyer said the government could ban the distribution of books paid for by corporations before elections.
“The government’s answer has changed,” Ms. Kagan said, adding that the Federal Election Commission had never tried to regulate distribution of books.
Chief Justice Roberts bristled at that statement. “We don’t put our First Amendment rights in the hands of F.E.C. bureaucrats,” he said.
He then asked about pamphlets. “A pamphlet would be different,” Ms. Kagan said. “A pamphlet is pretty classic electioneering.”

Conditioning campaign finance regulation on federal contracting is a sensible bright line rule that is much easier for bureaucrats to implement, and for the Justice Department to defend.
In a sense, we’re just trying take the “personhood” of corporations seriously. The Supreme Court has granted corporations free speech rights, because the law treats these artificial creations as legal persons. But these powerful and publicly-traded fictional people should at least also be subject to the same anti-corruption restrictions as real people. Current law prohibits federal contractors (and those that are trying to become one) from directly or indirectly making contributions to political parties and candidates. Our proposal to bar contractors from buying endorsement time merely captures one powerful method of making an indirect contribution.
Bruce and I are the authors of Voting With Dollars: A New Paradigm for Campaign Finance Reform.