A Myth of Grass-Fed Beef 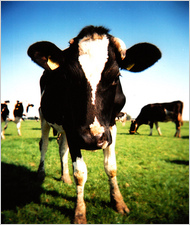 On the PBS website for the muckraking documentary King Corn-a film that roundly attacks industrial agriculture-the following declaration is made: “Before WW II, most Americans had never eaten corn-fed beef.” This claim, which has become a mantra in sustainable agriculture, is more often than not dispatched to rally support for grass-fed beef-a supposedly healthier and more environmentally sound way to feed cattle-which is to say, in accordance with the rhythms of nature rather than the time clock of industry.
Just a brief sample:

Now, it’s hardly my intention to wade into the crossfire of the grass- v. grain-fed debate (although I suspect that’ll be inevitable). Instead, I simply want to point out that any claim to cows eating corn being a recent development is, to say the least, deeply suspect.
Let’s rewind to the past:

Once again, I’m not arguing that the grass-fed alternative isn’t a viable response to the problems of factory farming grain-fed cows. I’m only suggesting to advocates of the grass-fed option that, if they feel so compelled to draw on the past to support the present, they should start by providing some footnotes. The romance of a pasture-fed past will only take the story so far.