Disequilibrium in the Market for Economics Reporting?

An interesting finding from a recent Gallup poll, reporting on, well, reporting. There appears to be substantial excess demand for insightful reporting on economic issues: 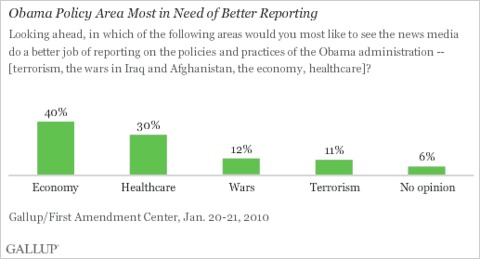 Why haven’t savvy journalists (or their editors) arbitraged away the different returns across topics?
I’ve got five possible stories:

I think number five rings true. I would be interested in data on number one (are circulation numbers for the Financial Times, the Wall Street Journal or The Economist currently particularly high?). Numbers two or three might be part of the story, but each of these only works if the dynamics of number four are part of the story.
Or perhaps you have a better explanation. Comments are open.