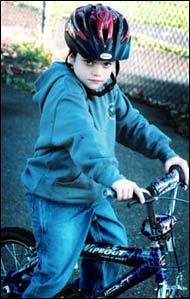 In a new working paper called “The Intended and Unintended Effects of Youth Bicycle Helmet Laws” (abstract here; pdf here), Christopher S. Carpenter and Mark Stehr offer a surprising conclusion: while mandatory helmet laws have led to increased helmet use, and while helmet use has been shown to reduce bicycle fatalities, such laws also seem to lead to a decrease in actual bike riding.
Why?
Carpenter and Stehr lay out their case compellingly. They exploit a convenient variable: the fact that helmet laws exist in only 21 states, pictured here: 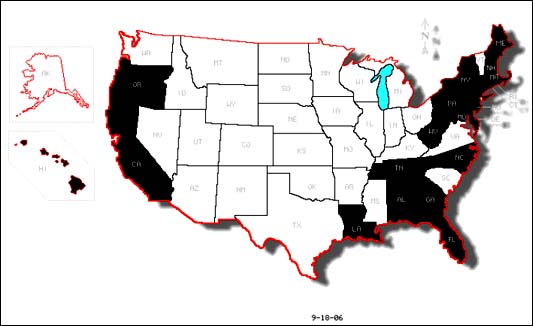 While conceding that these are primarily “coastal” states, the authors note that they cover more than 50 percent of the U.S. youth population.
Their research first confirms earlier research that “helmet laws significantly reduced bicycling fatalities among youths age 0-15 (i.e., youths who were directly treated by most states’ age-16 helmet laws) by about 19 percent.”
Their research further suggests “that helmet laws significantly increased youth helmet use by 29-35 percent.”
But: “There is also robust evidence for an unintended and previously undocumented mechanism: helmet laws produced modest but statistically significant reductions in youth bicycling participation of 4-5 percent.”
The authors offer three explanations for why this may be true:
1. The cost of helmets, both monetary and social — i.e., Helmets are uncool, so if I’ve got to wear a helmet to ride my bike, I’ll find something else to do.
2. “There is evidence that youths have suboptimally high discount rates (Gruber 2001), such that some youths might place too little weight on the expected gain in future utility from the prevention of injury or death relative to the costs of wearing helmets today.”
3. Bike-helmet laws lower the price of activities similar to biking — skateboarding, rollerblading, etc. — that do not require a helmet.
These seem perfectly sensible to me, but I might add a couple other possible explanations:
1. Helmets are a hassle.
2. Helmet laws make cycling seem more dangerous than we used to think it was. Therefore, a certain kind of parent develops a bias against it, and no longer encourages his or her kids to ride a bike — or, perhaps, never even bothers to buy the kid a bike.
Whatever the case, a downturn in bike ridership may strike some people as a grievous strike against the American character. On the other hand, it’s great news for the likes of Nintendo, Sony, and Microsoft.