Is Costa Rica Even the Happiest Country in Latin America?

No. Let me follow up on yesterday’s post, with more data testing Nicholas Kristof‘s assertion that Costa Rica is the happiest nation in the world.
Unfortunately, the data that Kristof was citing weren’t actually measures of happiness. Instead, Kristof analyzed data on life satisfaction. As we saw, data from the same survey analyzing where respondents perceive themselves to stand on “the ladder of life,” led Costa Rica to fall from the number-one spot to equal 19th. But neither of these is actually a measure of “happiness.”
Fortunately, the good folks at the LatinBarometer just sent me the latest data from their 2008 poll. This poll does measure happiness. And it turns out that Costa Rica is not even the happiest country in Latin America. I’ve summarized these data in the graph below. 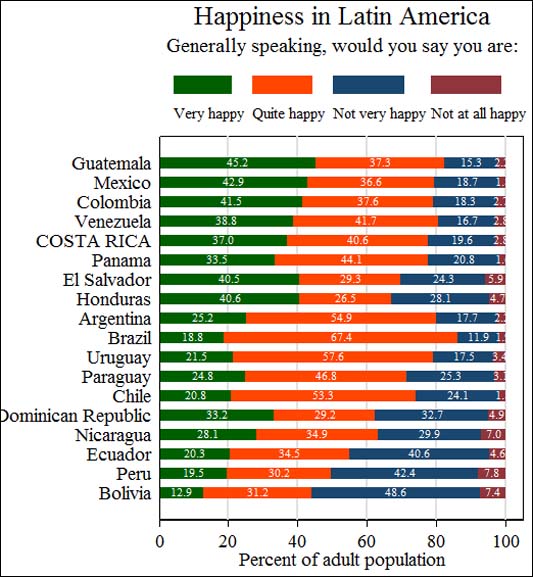 There are different ways of ranking these 18 nations. If we are looking at the proportion “very happy,” Costa Rica ranks seventh, behind Guatemala, Mexico, Colombia, Venezuela, El Salvador, and Honduras. Focusing on the proportion who are “quite happy” or “very happy,” Costa Rica pulls ahead of El Salvador and Honduras, but behind Argentina, Brazil, and Uruguay, and so ranks equal eighth of eighteen, equal with Panama. My preferred ordering is based on an ordered probit regression on country fixed effects, which puts Costa Rica fifth. (This is the ordering I used in the graph.)
Unfortunately for Kristof’s hypothesis, there’s no way to look at the available data and see Costa Rica as the happiest nation even in Latin America.