Quotes Uncovered: Who First Called It a Spade? 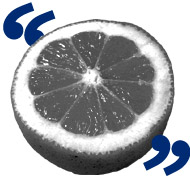 Each week, I’ve been inviting readers to submit quotations whose origins they want me to try to trace, using my book, The Yale Book of Quotations, and my more recent research. Here is the latest round.
aaron asked:

“What goes around comes around.”

This is a proverb. The earliest citation for it given by The Yale Book of Quotations is in Malcolm Braly‘s book, On the Yard (1967), but subsequently it has been pointed out to me that it appeared earlier in a 1962 book by Paul Crump, Burn, Killer, Burn!
Kate asked:

Any chance on figuring out where the saying ‘”When life hands you lemons, make lemonade” comes from? I’ve gotten Julius Rosenwald, Dale Carnegie, an “ageless proverb,” and “longtime common knowledge” as answers in my hour-long search. Is your book any better?

This also is a proverb. The Yale Book of Quotations, which eliminates the need for hour-long searches, traces it back as far as the New Oxford (Pennsylvania) Item, Apr. 19, 1917: “If life hands you a lemon … start to selling pink lemonade.”
Suzi Barbee asked:

I remember reading somewhere that “to call a spade a spade” was an admonition to Victorian (female) card players who “delicately” called a spade a fleur de lis instead.

That’s a pretty wild one even as apocryphal quotation stories ago. The YBQ states that Desiderius Erasmus, in his 1515 book Adagia, mistranslated an ancient Greek word for “trough” as “spade,” thus creating the expression “to call a spade a spade.” “Call a trough a trough” appears in Demosthenes‘s oration “Olynthus,” quoting Philip of Macedon, and in a fragement by Menander.
Mike asked:

“Good fences make good neighbors.” Frost made it famous in his poem “Mending Wall,” but where did he pull it from?

Very astute of you to realize that this predated Frost, who is usually considered to be the coiner. The YBQ traces this proverb back to the Western Christian Advocate, June 13, 1834.
Rich asked:

Wondering about Robert Burns‘s “auld lang syne.” Does that phrase emanate from him?

The Yale Book of Quotations notes that, long before Burns used it, “The phrase ‘auld lang syne’ appears in Scotch Presbyterian Eloquence Display’d (1694): ‘The good God said, Jonah, now billy Jonah, wilt thou go to Nineveh, for Auld lang syne (old kindness).'”
Do any readers have any other quotations whose origins they would like me to attempt to trace?