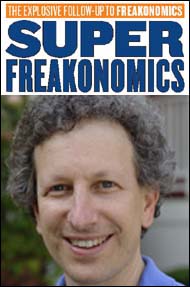 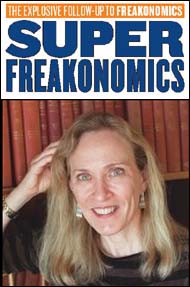 In the previous installment of our virtual book club, Sudhir Venkatesh answered your questions about his research on street prostitution.

Now, moving on to another section of Chapter One, here’s your chance to ask a pair of researchers about a central and pressing fact of U.S. economic life: the enduring wage gap between men and women.
Claudia Goldin is the Henry Lee Professor of Economics at Harvard University and director of the National Bureau of Economic Research’s Development of the American Economy program. Lawrence Katz is the Elisabeth Allison Professor of Economics at Harvard and a research associate at the NBER. They are among the most esteemed economists in the world at sorting out labor questions, historical and present, especially when it comes to the male-female divide.
Here are a few sections of SuperFreakonomics in which we rely on their research:

For American women twenty- five and older who hold at least a bachelor’s degree and work full- time, the national median income is about $47,000. Similar men, meanwhile, make more than $66,000, a premium of 40 percent. The same is true even for women who attend the nation’s elite universities. The economists Claudia Goldin and Lawrence Katz found that women who went to Harvard earned less than half as much as the average Harvard man. Even when the analysis included only full-time, full-year employees and controlled for college major, profession, and other variables, Goldin and Katz found that the Harvard women still earned about 30 percent less than their male counterparts.
What can possibly account for such a huge wage gap? There are a variety of factors. Women are more likely to leave the workforce or downshift their careers to raise a family. Even within high-paying occupations like medicine and law, women tend to choose specialties that pay less (general practitioner, for instance, or in-house counsel). And there is likely still a good amount of discrimination. This may range from the overt – denying a woman a promotion purely because she is not a man – to the insidious. A considerable body of research has shown that overweight women suffer a greater wage penalty than overweight men. The same is true for women with bad teeth.

Among the top fifteen hundred companies in the United States, only about 2.5 percent of the highest paying executive positions are held by women. This is especially surprising given that women have earned more than 30 percent of all the master’s in business administration (MBA) degrees at the nation’s top colleges over the past twenty- five years. Their share today is at its highest yet, 43 percent.
The economists Marianne Bertrand, Claudia Goldin, and Lawrence Katz tried to solve this wage- gap puzzle by analyzing the career outcomes of more than 2,000 male and female MBAs from the University
of Chicago.
Their conclusion: while gender discrimination may be a minor contributor to the male-female wage differential, it is desire – or the lack thereof – that accounts for most of the wage gap. The economists identified three main factors:
Women have slightly lower GPAs than men and, perhaps more important, they take fewer finance courses. All else being equal, there is a strong correlation between a finance background and career earnings.
Over the first fifteen years of their careers, women work fewer hours than men, 52 per week versus 58. Over fifteen years, that six-hour difference adds up to six months’ less experience.
Women take more career interruptions than men. After ten years in the workforce, only 10 percent of male MBAs went for six months or more without working, compared with 40 percent of female MBAs.
The big issue seems to be that many women, even those with MBAs, love kids. The average female MBA with no children works only 3 percent fewer hours than the average male MBA. But female MBAs with children work 24 percent less. “The pecuniary penalties from shorter hours and any job discontinuity among MBAs are enormous,” the three economists write. “It appears that many MBA mothers, especially those with well-off spouses, decided to slow down within a few years following their first birth.”

We write a lot more in the chapter about women’s wages, but this should give you enough ammunition to ask Goldin and Katz some good questions. Leave your questions in the comments section below and, as always, we’ll post their answers in short course. If you’re interested in reading some of the underlying research papers, you can find them here, here (with co-author Ilyana Kuziemko), and here (with co-author Bertrand).
Addendum: Katz and Goldin answer your questions here.