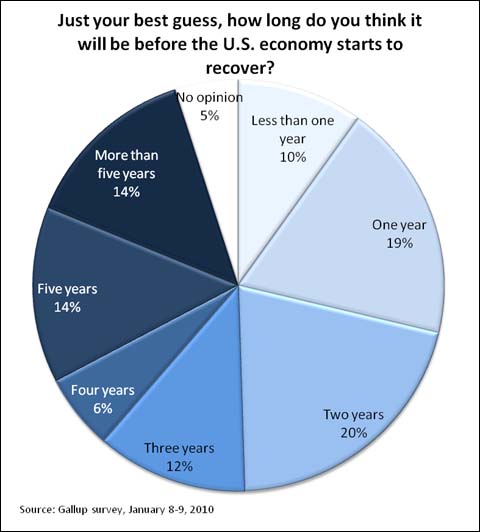 It’s clear people are pessimistic about the economy. Very pessimistic. (I should quibble that the question is sort of leading; while any response was allowed, negative numbers don’t seem like a natural response.)
But I think there’s something else at play here. There’s a disjunction between how economists use words like “recession” and “recovery,” versus how the general public understand these terms. According to the NBER approach, “A recession begins when the economy reaches a peak of activity and ends when the economy reaches its trough.” So the recession has ended and the recovery has begun, but only because things got as bad as they are going to get. The “recovery” that we are in will take us from this low point, through some hard times, and hopefully, eventually, to a brighter place.
By contrast, I suspect that when non-specialists talk about a “recovery,” they are looking for the economy to return to some level of good health — perhaps to “recover” all those lost jobs that have disappeared over recent years. This definitely didn’t occur in the middle of last year, and by this definition, the Gallup respondents may well be too optimistic. It is extremely unlikely that the economy will recover the nearly nine million lost jobs for years to come. Indeed, it’s probably going to take a lot longer than five years before the unemployment rate falls below 4 percent again.
The public, it seems, is interested in the level of the business cycle, and the unemployment rate is a useful metric for this discussion. Yet the language that professional economists use is much more about changes in the state of the cycle. This is why economists talk a lot more about changes in things — growth in non-farm payrolls, or GDP. And right now it’s even more confusing, because commentators have been focused on the diminishing rate at which the economy is shedding jobs. That is, the wonks right now are talking about a rate of change of a rate of change.