SuperFreakonomics Book Club: Ask Allie the Escort About Her Work and Life 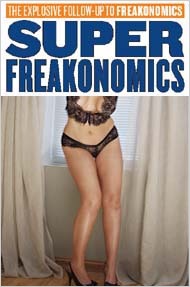 In the SuperFreakonomics Virtual Book Club, we invite readers to ask questions of some of the researchers and other characters in our book. Past Q&A’s can be found here.

We have finally reached the end of Chapter 1, which brings us to Allie, the high-end escort whom we profile at some length. She has appeared earlier on this blog, answering some of our questions about the Eliot Spitzer affair. Now is your chance to ask Allie some questions of your own about her life and work as an escort. Here are a few relevant passages from the book:

She [initially] set her fee at $300 an hour – that’s what most other women of her caliber seemed to be charging – with a few discount options: $500 for two hours or $2,400 for a twelve-hour sleepover. … Eventually she raised her fee to $350 an hour. She expected demand to fall, but it didn’t. So a few months later, she raised it to $400. Again, there was no discernible drop- off in demand. Allie was a bit peeved with herself. Plainly she had been charging too little the whole time.

But at least she was able to strategically exploit her fee change by engaging in a little price discrimination. She grandfathered in her favorite clients at the old rate but told her less- favorite clients that an hour now cost $400 – and if they balked, she had a handy excuse to cut them loose. There were always more where they came from.

It wasn’t long before she raised her fee again, to $450 an hour, and a few months later to $500. In the space of a couple of years, Allie had increased her price by 67 percent, and yet she saw practically no decrease in demand. Her price hikes revealed another surprise: the more she charged, the less actual sex she was having. At $300 an hour, she had a string of one-hour appointments with each man wanting to get in as much action as he could. But charging $500 an hour, she was often wined and
dined — “a four-hour dinner date that ends with a twenty-minute sexual encounter,” she says, “even though I was the same girl, dressed the same, and had the same conversations as when I charged $300.”

The downside [of working without an agent] was that Allie had no one but herself to screen potential clients and ensure they wouldn’t beat her up or rip her off. She hit upon a solution that was as simple as it was smart. When a new client contacted her online, she wouldn’t book an appointment until she had secured his real name and his work telephone number. Then she’d call him the morning of their date, ostensibly just to say how excited she was to meet him.

But the call also acknowledged that she could reach him at will and, if something were to go wrong, she could storm his office. “Nobody wants to see the ‘crazy ho’ routine,” she says with a smile. To date, Allie has resorted to this tactic only once, after a client paid her in counterfeit cash. When Allie visited his office, he promptly located some real money.

But she categorically insists that her clients wear a condom. What if a client offered her $1 million to have sex without a condom? Allie pauses to consider this question. Then, exhibiting a keen understanding of what economists call adverse selection, she declares that she still wouldn’t do it – because any client crazy enough to offer $1 million for a single round of unprotected sex must be so crazy that he should be avoided at all costs. About 60 percent of her appointments were for a single hour.

[After trying her hand at real-estate sales], finally Allie realized what she really wanted to do: go back to college. She would build on everything she’d learned by running her own business and, if all went well, apply this newfound knowledge to some profession that would pay an insanely high wage without relying on her own physical labor. Her chosen field of study? Economics, of course.

Please ask your question in the comments section below — you know the limits, people — and, as always, we will post the answers in short course.

How much physical pleasure do you get from your work? How much "faking" do you do for the man's benefit? Have you ever gotten emotionally involved with clients? How would you characterize your romantic relations with men who are not clients (now and/or in the past)? What are your thoughts on love? Will you ever marry exclusively?

You nerds are priceless!

What are your thoughts on deep french kissing (DFK)? Do you provide it? Do you enjoy it with most clients? For many johns, DFK is what distinguishes a GFE.

do you get along with your father?

Have you ever been blackmailed to keep your secret life a secret?

What is the average age of your clients? Are any of wives of your married clients ok with their husbands' encounters? How much of a factor do the police play in your work?

Is the apparent takeover of the stripping profession by Eastern Europeans mirrored in escorting? And if so, is it possible for native English speakers to charge a premium?

PS - Have you watched/read Secret Diary of a Call Girl - and what do you think of it?

Do you factor in everything else you do as work, such as screen clients and prepare for dates and track a true hourly wage?

1. Buyers and sellers in legal markets have access to courts who enforce contracts in part via the threat of a lawsuit, but that option isn't available to sex workers and their clients. How, then, do you get around it? For instance, what can you practically do to ensure that a client doesn't cheat you or do something that negates the terms of the agreement? What can he do, also, to ensure that you provide the services he has paid for?

3. How much are your monthly expenses as a sex worker?

Do you survive solely on word of mouth advertising or do you have other methods available to you?

Have you ever had any sort of legal ramification for your work? If not, how close have you been?

What is your opinion of the profession, ignoring the social and legal ramifications? If prostitution were legal and not socially stigmatized, how would you feel about your child being in the profession?

Are you creeped out by Freakonomics' obsession with prostitution?

Excellent use of New York Times space -- giving us the lowdown on how call girls do business. The economics certainly gives it a tony edge....

As an escort, what precautions do you take to guard for your physical safety?

And: have you ever 'fallen in love' with a customer?

As a graduate student in Economics I did much tutoring and found that when I raised my price to above the level others were charging demand for my services was steady or even increased just as yours did. Do you feel that the inelasticity of demand for your services was because a higher price signaled a higher quality to the client or was it the case that your prior experience in your profession justified the raise or is there another explanation? Related to this, do you feel that a new escort could enter the market and charge the higher rates that you arrived at over many years?

Do you know Tiger Woods?

I'm not sure why you guys are so obsessed with prostitution. I was sorry you included that chapter in your latest book because my 17-yr-old son read Freakonomics and enjoyed it and has really been looking forward to reading the latest. But I can't recommend it to him with that chapter in it. I hid the book off to the side of my desk till he forgot about it and then returned it to the library.

On your downtime do you find yourself scouting for clients?

Are you recognizable as a sex-worker or do you 'work' in costume and/or change your identity?

Have you ever considered travelling to countries where sex-work is legal to make a better safer living?

Do you think you are a smart person?

Would you have sex with a customer without a condom if he agreed to get tested for STDs and also pay you extra?