When are High Wine Prices Justified? 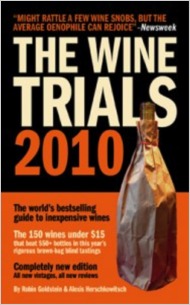 In the wake of some of the latest chatter about The Wine Trials 2010 (this one from Joe Briand, wine buyer for New Orleans’s excellent Link Restaurant Group, e.g. Cochon, Herbsaint, with a response from Wine Spectator executive editor Thomas Matthews), I thought it was time for a quick clarification of first principles here.
People have sometimes (often, maybe) misinterpreted The Wine Trials (and The Wine Trials 2010) as making the claim that no expensive wines are worth the money, or that cheap wine is generally “better” than expensive wine. In fact, I make neither one of those claims in the book.
Rather, my basic points are these:

What situations two, three and four have in common is that the cost of production of each of these premium wines is virtually unrelated to the street price.
One might divide wine pricing theory into two rough schools of thought. There is the camp that believes wine should be priced from a supply-side/cost-plus perspective-you take the cost of production of the wine, you add reasonable costs and a modest profit for the producer, you factor in markups for distribution and retail, and you arrive at more or less what the wine should cost. The other camp believes that wine should be priced from a demand-side perspective-that a wine is worth whatever the market is willing to pay for it.
The reason I’m in the first camp, and not the second, is that I don’t subscribe to the neoclassical model of consumer rationality upon which the demand-side pricing theory is built, a counterfactual universe of stingily hypersensitive, quality-sniffing consumers. My sense is that, especially when it comes to hazy markets like wine, real human beings — within certain constraints — generally anchor themselves to market prices that are imposed upon them, and generally pay for things what they’re told those things are worth.
One attempt to justify superpremium wines with modest costs of production is an opportunity-cost-of-land argument — that wine in the Champagne appellation is so expensive that the opportunity cost of that land can justify higher prices. I’m unsympathetic to that argument, because real estate prices track market wine prices, so the price of land is not an independent factor.
So when are premium prices justified in my camp?
When the cost of production is high. The fact that Matthews and Briand mention 1er Cru Burgundy and German whites as examples of expensive wines worth the money suggests that they might be in my camp too, because these are particular examples of wine regions in which grapes are often harvested from small plots with very low yields. In the case of German TBA, for instance, the harvesting is often done on steeply terraced slopes that are extremely difficult to work. Ice wines and botrytized wines — the priciest of German whites — are indisputably more difficult and expensive to produce than almost any other type of wine.
In short, while spending $50 or $75 or even $100 on a good Sauternes, TBA, or top red Burgundy might not always make economic sense for the buyer — particularly if it’s a buyer without much experience in wine — it’s at least justifiable from a supply-side pricing perspective. The $150 you’ll pay for a bottle of Opus One or Krug, meanwhile — never mind the $5,000 you’ll pay for a bottle of 2005 Pétrus — has little to do with the cost of production.