A splendid graph, showing high-frequency data on water consumption in Edmonton during the men’s Olympic hockey final (on February 28), and comparing it with the rather smoother pattern seen the day before. 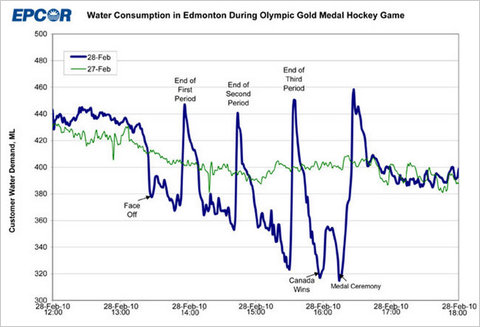 I agree with your interpretation, but I wonder why the area above the green line is so much smaller than the area below the green line. It looks like the peaks were higher, but that total water consumption for the day was much lower. Perhaps there were fewer total bathroom visits? But that would imply that lots of people visit the bathroom multiple times per hour. Surely some do, but that many?

I think it was the Canadians wetting their pants over the possibility of losing to America. No one was drinking--THIS WAS FAR TOO IMPORTANT TO WATCH DRUNK!

The thing I notice is that the water consumption does not level back off until, it appears, well into the next period. That is, there seems to be a rush for the exits...then a slow migration back to watching TV. That's kind of interesting.

The graph only covers from noon until 6pm. The total day consumption is probably made up before and after the graphed time period.

Check the vertical axis: the bottom of the graph is at 300, not zero, so the change in total water consumption is pretty small.

But there is a definite change. I'd say that it's not so much bathroom visits, but everything else. People are going to postpone doing laundry, dishes, etc. during game time too.

Aaron S - "The thing I notice is that the water consumption does not level back off until, it appears, well into the next period. That is, there seems to be a rush for the exits...then a slow migration back to watching TV. That's kind of interesting."

I'd assume it's the same phenomenon as at live sporting events - too many people, too few toilets. The available facilities go into 100% usage pretty quickly at the end of a period, so the queue builds up quickly - then dissipates, more slowly, over the course of the break and into the beginning of the next period.

Good point, but if they facilities had a line, wouldn't we seen a "plateau" of usage--i.e., intead of a peak and fall, we'd see more or less continual usage for a good while (at least until the line played out), wouldn't we?

But you do bring to mind something else.... It might be that many people, knowing there will be a rush for the bathrooms, simply keep their seats for a few minutes, waiting for the lines to clear out, THEN they go themselves.

From the graph, it appears that there is a rush...then an almost immediate, but gradual, falling off (maybe some people going back to their seats, deciding to delay matters a few minutes). Maybe it's the "Queue" effect?

In any case, there might be something important to be learned here.

It's baffling how people are irresistibly drawn to blindly attribute causation based on correlations. Logic, journalism, and stats at it's worst.

Regarding the apparent difference in total consumption compared to the previous day, bear in mind that we are comparing a Saturday with a Sunday, when there may be water-consuming businesses (restaurants, for example) that are either not open or have significantly fewer customers than normal. Having seem similar plots like this for electricity consumption while working in the utility industry, I can say that typical Saturdays and Sundays differ from each other as well as from typical Weekdays. A better comparison would have been to the prior Sunday, or even better, to the average of many prior Sundays (from the same time of year).

A few points to respond to the questions that keep coming up:
1. There is no 'queue effect' of any kind since this is a graph of the water usage in Edmonton (in Alberta), while the game was played in Vancouver (British Columbia). The implied correlation, which I happen to think is more meaningful than the sharks-and-ice-cream bit, has to do with people watching at home or in public places smaller than a stadium.
2. In hockey games, the breaks between periods last 17 minutes. It's hard to say exactly how long those peaks are, but it appears to me that they are roughly in the 20-minute range, indicating people were pretty much settled back in by the time the puck dropped again.

Okay, I live in Edmonton (very cool to see my city's water consumption discussed on NYTimes Freakonomics), and I just know what we went through that day.

The game started at 1:00 pm MST, so prior to that we were getting snacks ready, pouring wine, pouring glasses of water.

Once the game started, we didn't move from the couch until the periods ended and then it was to use the facilities. There were three of us watching and two bathrooms to use.

Once the USA tied in the end of the third period, I was worried we were done, so I wasn't too keen about even watching the rest of the game, but again, bathroom break.

Once the OT period started, again, didn't move from the couch until we had won, lots of yelling, lots of cheering, lots of clinking of glasses in toasts to the Canadian's and especially Crosby.

And interestingly enough, we talked about what would be the measurement of toilet flushes in Canada during the gold medal men's hockey game.

Thanks for sharing this. And again, really cool to see my city's water consumption on your blog!

@Mario - Eighty percent of Canadians watched at least some of the hockey game live, so I don't see how that couldn't affect water consumption.

@Q - I think the significant part of this graph isn't the difference in total consumption on the Sunday and Saturday, which would be different between any Sunday and Saturday as you say, but the spikes that correspond so closely to the periods, OT, and medal ceremony.

Scale means everything on a chart. I work in an office where people will put up a dreaded PPT and have comparison charts on a single slide with differing scale- it drives me nuts.

In the case of the chart in this article- the deviation appears larger to the eye than it really is because the Y axis starts at 300 not 0. This is typicaly done in order to make deviations in data appear for impactful than they truely are. USA TODAY does this often.

Thank you, New York Times Freakonomics . Our little city Edmonton''s water usage discussed in a giant newspaper-wow! that's amazing!. Hockey is Canada's game and we are passionate about it. We value our water so much, thus tracking water consumption is good way of educating the public.

@ jeffreytg: The thing about it is, this graph was originally prepared for internal consumption, as a small item of interest in the employee newsletter. There wasn't really any thought given to sensationalizing this. As many noted, the apparent drop in water usage has more to do with people's habits on certain days. If you could see the water stats after 6, I think you'd see a spike in usage on Saturday.

The sum of a million such queues, ranging in duration from "as fast as one person can pee in his own house" minutes to "how many hockey fans fit in a sports bar?" minutes, would be a sharp peak that then drops off gradually, as the individual queues end one after another.