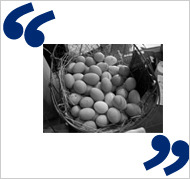 Each week, I’ve been inviting readers to submit quotations whose origins they want me to try to trace, using my book, The Yale Book of Quotations, and my more recent research. Here is the latest round.
Jim Frierson asked:

Origins of “the real McCoy” and “high falutin.” The Delta Queen’s onboard historian tells us these expressions can be traced to the steamboat era.

“High falutin'” is documented by the Oxford English Dictionary back to 1839. Is that the steamboat era? “Real McCoy” is just a variant of “real Mackay,” a Scottish expression of uncertain etymology that has been traced at least as early as 1857. That may be the steamboat era, although Scotland is kind of far from the mighty Mississippi.
Janet Karasz asked:

I would love you to parse the phrase, “Putting all your eggs in one basket.” Besides it’s origins, which I suspect is quite old, it has implications on the way we do business.

You’re right about this proverb being quite old. The Yale Book of Quotations documents it as follows:

Origins of: “in politics, there are no permanent friends or enemies, only permanent interests”
“think global, act local”?

The all-knowing Yale Book of Quotations has the following two entries:

We have no eternal allies and we have no perpetual enemies. Our interests are eternal and perpetual, and those interests it is our duty to follow.
Henry John Temple, Viscount Palmerston, Speech in House of Commons, Mar. 1, 1848
In most human affairs, the idea is to think globally and act locally.
Rene Dubos, ‘The Despairing Optimist,” American Scholar, Spring 1977, The motto “Think Globally, Act Locally” first appeared as the title of an interview with Dubos in EPA Journal, Apr. 1978