A New Kind of Starting Pitcher?

A reader named Tony Trout, a 40-something data analyst in Madison, Wisc., wrote us a while back with a proposal for a fundamental change in how baseball is played. His lifelong interest in baseball actually predates his birth: “I am named for Tony Oliva, who was voted AL rookie of the year a few days before my birth.”

If you have a hot reliever who is not your closer and can pitch two innings consistently (as in Mariano Rivera in 1995), why not start the game with that pitcher? If you could get two solid innings out of a reliever at the start of the game, your actual starter would only need to pitch seven innings to finish the game. Or, that actual starter could pitch just six innings and hand it over to the closer for the ninth.
I would suggest calling the new relief position “The Opener.” 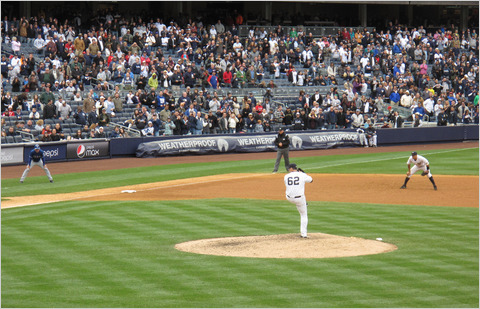 Photo: Stephen J. Dubner The opener? Joba Chamberlain firing the last pitch in a recent Yankees victory over the Texas Rangers. Should he be pitching the first two innings instead?

The idea is hatched from a few observations:
First, there are almost no complete games by starters anymore. Number of complete games that are not also near no-hitters or shutouts? Very few. With the high number of pitches necessary to retire modern hitters, starters inevitably flag. Because they want to delay the use of the bullpen as much as possible, managers tend to leave the starters in until they’re tired and ineffective.
They pitch until they fail. I can’t help thinking this is psychologically suboptimal for the large-ego starting pitchers.
So, why ask starters to pitch until they fail? Why not ask them to pitch for just six innings, the third through the eighth? Most starters would be delighted by this “light” load and pace themselves accordingly. I’m not a pitcher or even a baseball player, but I just think there’s a lot of weakness in not knowing how long you’re going to be out there.
The second observation is that hitters are thrown off by a change of pace. Aside from being tired in the seventh inning, the starting pitcher is also facing the same line-up for the third time. The hitters may be getting accustomed to that pitcher’s rhythm. If you could actually start the game with a pitcher who has a phenomenally different pitching style, you could help the “starter” to be successful when they appear in the third inning.
Ideal candidates for this “opener” would be fireballers, side-arm specialists, odd lefties, and knuckleballers.
The third observation is strictly anecdotal: hitters love the first inning. I think hitters really get geared up for the top of the game. How many times does a game start with the starter getting shelled? I think starters are also pacing themselves early on, hoping to get through the first with an “easy inning.” If an opener knew they only had to pitch two innings, he could pace himself and be successful.
Look at closers: one of the benefits of being a closer is that you only need to go out there and collect three outs. Let’s just give another pitcher that same assignment, only double it and put it at the top of the game.
The fourth observation is the effectiveness of pitchers in the All-Star game. Admittedly, they really want to perform well. But so do the hitters. What is known is that they’re going to pitch two innings and two innings only. There is a benefit there.
Finally, if a third-inning starting pitcher had good stuff, he could pitch a mere seven innings and close out the game. On a regular basis you could get through the game using only two pitchers.
The ultimate pitcher for this assignment would be a knuckleballer. Hitters hate them in their own right, but also hate them because they throw off their timing. The third-inning pitcher would benefit from this. Also, knuckleballers are really only playing catch: a knuckleballer could practically pitch two innings every day. Two knuckleballers could cover you for the whole season. The pitching staff would be two knucks, five starters, four long men/set-up men and a closer. Cinch.
There will be institutional resistance to this idea:
1. Starters apparently have this elaborate warm-up routine that would be thrown off by not knowing when they are actually going to start throwing. I think this is crap. The home starting pitcher knows he’s going to throw the first pitch at 7:05 p.m., but the visiting pitcher can start anywhere from 7:08 to 7:45.
2. Starters could get fewer decisions. If the winning team scored all their runs in the first two innings, it would be really hard for the scorer to deprive the opener of the win. He was “the pitcher of record.” On the other hand, according the scoring rules, the pitcher who starts the game can’t get the win unless they pitch five innings. So, I guess the opener would lose out on that one. Problem solved!
3. Starters would be deprived of the opportunity of complete games, shut-outs and no-hitters. To that, I say, boo hoo. Those are three antiquated statistics. We’ve moved on. The No. 1 starters could still start their games. You’d probably want them to. This concept would work great with a fifth starter (and probably a fourth and third starter too).
4. Starters take great pride in starting. They’re probably contractually entitled to X number of starts a season. If you manage to get around the ego, you probably can’t get around the contract.
5. Everybody who wears a uniform hates knuckleballers. Hitters hate them. Managers, many of whom were catchers, hate them. I think fans would tire of them too. The knuckleball is underused in baseball. Considering the ratio of their effectiveness to their cost, there should be at least one knuckleballer on every staff. There’s not because of an institutional dislike for the pitch. It’s not real baseball, apparently.
6. If you have a pitcher good enough to go out and pitch two scoreless innings reliably, they’re probably one of your best starters or your closer already. In the zero-sum game of available talent, are you going to want to use up a good pitcher early? This is probably the biggest hurdle.
7. Baseball people are pretty conservative. Notice how long it takes stylish facial hair to appear? And then how long it takes for it to disappear? They don’t like change. If it didn’t work the first few times, it would be disdained and discarded.
Still, I would expect some teams would toy around with it. There should be pitchers who would excel in two innings of work. Thanks for your consideration.

You may think Tony’s idea is absurd — and I’m sure you will let him know what you think in the comments: not all flamethrowers are baseball people, but it seems all baseball people are flamethrowers. If nothing else, I bet you will think of “the opener” the next time your team falls behind 6-0 by the third inning, yanks the starting pitcher (and renders him useless for the next four days), then brings in a reliever who proceeds to shut down the other team.