In 2007 and 2008, food prices around the world spiked, prompting concern in the developed world and full-blown riots elsewhere. Pundits blamed everything from China’s growth to the increased use of biofuels. Then, in the summer of 2008 food prices receded. This created significant confusion over the determinants of food prices and the likelihood of future crises.
Patrick Westhoff, the co-director of the Food and Agricultural Policy Research Institute (FAPRI) and a research associate professor at the University of Missouri, investigates the events of 2007 and 2008 in his new book The Economics of Food: How Feeding and Fueling the Planet Affects Food Prices. He explains the factors that lead to price increases and that may drive food prices in the future. Westhoff has written a guest post addressing one potential driver of food prices: the growth of China’s middle class. 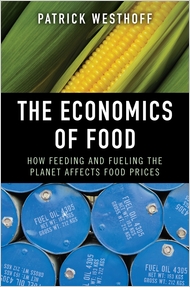 Will Changing Diet Demands in China Lead to Runaway Food Prices?
By Patrick Westhoff
Since Lester Brown‘s book Who Will Feed China? Wake-Up Call for a Small Planet was published in 1995, concerns about China’s effect on world food markets have waxed and waned. When prices for food, oil and other commodities were soaring in 2007 and early 2008, many people pointed to demand growth in China as a major culprit. Some worry that the current recession is just a brief respite and that rising Chinese demand will soon push commodity prices sharply higher again.
In the case of food, the basic argument is pretty simple. As the incomes of Chinese consumers rise, they will want to eat more meat. To supply that additional meat, more hogs, cattle and chickens will consume more corn, soybean meal and other feeds. Because China is such a large country, this increase in food demand will put enormous pressure on the world food system, and the inevitable result is higher food prices for everyone on the planet.
This simple story is not far-fetched, and it is very possible that rising incomes in China and other countries will make it hard for world food supply to keep up with demand. It is easy to find a wide range of supporting statistics. Here are just a few to set the stage, all based on USDA-reported data:

There is another side to the story. China may be a huge consumer of many food products, but it is also a huge producer. Food self-sufficiency has been a major policy objective of the Chinese government, and current trade statistics suggest that policy has been successful for many major food commodities. According to the latest USDA data, China is expected to be essentially self-sufficient in wheat, corn, rice and pork this year-less than 1 percent of domestic consumption will be imported, and less than 1 percent of domestic production will be exported.
If a country does not trade with the rest of the world, it cannot have a large direct effect on world markets. In a certain sense, it does not matter to consumers in the rest of the world if Chinese food consumption skyrockets or plummets, as long as China does not use imports or exports to balance its domestic food markets.
There are three problems with this argument. First, China is not self-sufficient in every major commodity. China gave up any pretense of being self-sufficient in soybean production a long time ago and is now the world’s largest soybean importer. In fact, China is expected to account for more than half the world’s soybean imports this year. The country imports soybeans to make soybean meal to feed to livestock and soybean oil for direct human consumption. Chinese demand for soybeans means more land in the United States, Brazil and Argentina must be devoted to soybean production, which pushes up prices for all major crops.
Second, even though China is self-sufficient in many major food commodities today, it has been a major player in world markets in the past, and will be again in the future. In the case of corn, for example, China has sometimes been the second leading exporter in the world, but it has occasionally also been a significant importer. Just the rumor of potential Chinese corn imports can send prices in futures markets soaring. Many analysts think it will be difficult for China to keep up with growing demand for grain as livestock feed, and that eventually the country will become a major importer. Even proportionally small swings in Chinese pork trade had a big impact on world pork markets in 2008 and 2009.
Third, when China tries to maintain self-sufficiency in some food products, it can have important spillover effects on other related markets. The soybean market is one example of this. Also, China uses more fertilizer than any other country, so it has a big impact on world fertilizer markets, with implications for farm production costs around the world. Likewise, when Chinese farmers buy and use more machinery, it impacts the prices of everything from steel to oil.
China is an important part of the story of world food prices, but everything from biofuel production to the weather also affects what people pay for the food they eat.