Is This the Answer to Hospital-Acquired Infections?

I have written quite a bit — probably far too much for the average person’s taste — about the poor state of hand hygiene in hospitals, and the resulting proliferation of bacterial infections. I often think I should shut up already about this problem. After all, it’s been 10 years since the Institute of Medicine’s damning report “To Err Is Human.”
Well, after taking at look at the latest National Healthcare Quality Report, I think I won’t be shutting up any time soon. Despite a lot of effort and innovation, despite a wise checklist approach, the problem doesn’t seem to be getting better:

Infections acquired during hospital care, also known as nosocomial infections, are one of the most serious patient safety concerns. It is unfortunate that HAI [hospital-acquired infection] rates are not declining. Of all the measures in the NHQR measure set, the one worsening at the fastest rate is postoperative sepsis (Table H.3). The two process measures related to HAIs tracked in the NHQR, both covering timely receipt of prophylactic antibiotics for surgery, are improving steadily. However, HAI outcome measures are lagging; only one shows improvement over time while three are worsening and one shows no change. This may, in part, reflect improving detection of HAI’s. 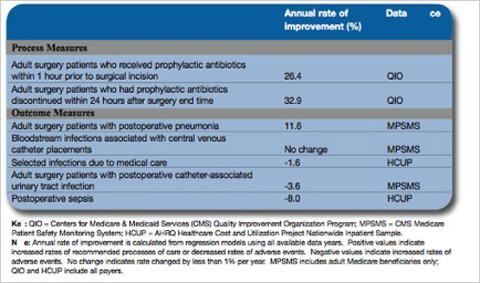 Why is it so hard to get hospital personnel, doctors in particular, to do a better job with hand hygiene?
My belief, and as we wrote in SuperFreakononomics, is that it’s a question of externalities: the bacteria that a doctor may pass along via poor hand hygiene do not typically damage the doctor him/herself, but rather the next patient down the line. In this sense, deadly bacteria are a lot like our daily pollution: we do not personally pay the cost of our actions, so we have weak incentives to change our behavior.
I have often thought that if only individual doctors could be held accountable for their poor hand hygiene — if, say, an individual’s bacteria could somehow be tagged so that if a patient died from a hospital-acquired infection, the source of those bacteria could be determined — that would radically adjust the incentives at work here.
Well, the first step toward such a system may be on the way. A study published in the Proceedings of the National Academy of Sciences called “Forensic Identification Using Skin Bacterial Communities” argues that:

Recent work has demonstrated that the diversity of skin-associated bacterial communities is far higher than previously recognized, with a high degree of interindividual variability in the composition of bacterial communities. Given that skin bacterial communities are personalized, we hypothesized that we could use the residual skin bacteria left on objects for forensic identification, matching the bacteria on the object to the skin-associated bacteria of the individual who touched the object. Here we describe a series of studies demonstrating the validity of this approach. We show that skin-associated bacteria can be readily recovered from surfaces (including single computer keys and computer mice) and that the structure of these communities can be used to differentiate objects handled by different individuals, even if those objects have been left untouched for up to 2 weeks at room temperature.

If such identification worked for nosocomial infections, life would surely become more complicated for doctors (and their malpractice lawyers). And it might be one of the best things to happen for patient safety since a fellow named Ignatz Semmelweis came along.