Quotes Uncovered: Does Economics Make You Want to Sing? 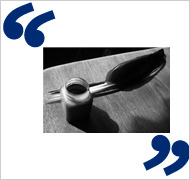 Each week, I’ve been inviting readers to submit quotations whose origins they want me to try to trace, using my book, The Yale Book of Quotations, and my more recent research. Here is the latest round.
JeeBo asked:

In The Yale Book of Quotations, I trace this as far back as an attribution to Elvis Costello in 1983. Garson O’Toole has done brilliant research finding earlier analogues, such as “singing about economics”:

Can you find the “West African proverb” that’s supposedly the basis for TR’s: Speak softly and carry a big stick?

Wolfgang Mieder, the world’s foremost proverbs scholar, has searched for years for this, but has been unable to track it down.
Rob asked:

I’ve been wondering about the original source for the quote “Never pick a fight with a man who buys ink by the barrel”. I’ve seen it attributed to Mark Twain and Benjamin Franklin.

“Just because I am paranoid, doesn’t mean they’re not out to get me.” While my parents swear this was my grandfather, I am pretty sure i read it or it is from someone slightly more well know.

The Yale Book of Quotations cites the movie Catch-22 (1970): “Just because you’re paranoid doesn’t mean they aren’t after you,” but then goes on to note that:

Nigel Rees, Cassell’s Humorous Quotations, records two earlier versions: “Because a person has monomania she need not be wrong about her facts” (Dorothy L. Sayers, Murder Must Advertise ch. 16 [1933]); and “Has it ever struck you that when people get persecution mania, they usually have a good deal to feel persecuted about?” (C. P. Snow, The Affair ch. 11 [1960]).