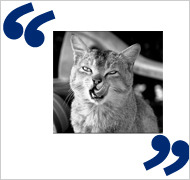 Each week, I’ve been inviting readers to submit quotations whose origins they want me to try to trace, using my book, The Yale Book of Quotations, and my more recent research. Here is the latest round.
Keith Hernandez asked:

My father would always say, “Son, there are 2 things in life no man can avoid; Death & Taxes.”  Where did this originate?

This is usually attributed to Benjamin Franklin, who said “in this world nothing can be said to be certain, except death and taxes” in a letter to Jean Baptiste Le Roy, Nov. 13, 1789.  However, Franklin was repeating a preexisting proverb.  The Yale Book of Quotations records “‘Tis impossible to be sure of any thing but Death and Taxes” from Christopher Bullock, The Cobler of Preston (1716), and “Death and taxes, they are certain” from Edward Ward, The Dancing Devils (1724).
Mike M asked:

“Curiosity killed the cat.”  This has never made sense to me and I’d like to know where it comes from.

It seems pretty clear that it is a proverb referring to cats’ well-known inquisitiveness, and the fact that sometimes that inquisitiveness gets them into trouble.
Carl asked:

I’ve always heard that this quote was attributed to Josef Stalin, “The Pope? How many divisions does he have?”

The Yale Book of Quotations cites Winston Churchill, The Gathering Storm (1948), in which Churchill quotes Stalin, when asked by French Foreign Minister Pierre Laval to encourage Catholicism in the Soviet Union in order to appease the Pope, May 13, 1935, responding: “The Pope?  How many divisions has he got?”
Rupert Millard asked:

Is it “out in the sticks” or “out in the Styx”?  Google has 130k hits for the former compared to 2.1k for the latter, which I nevertheless prefer.  Many thanks!

It’s “out in the sticks.”
j.b.garrity asked:

can you tell me the origin of “the lawyer who represents himself has a fool for a client”?

This is another proverb.  The YBQ‘s earliest version is “He who will be his own Counsellor, shall be sure to have a fool for his client” (William De Britaine, Humane Prudence [1702]).
Do any readers have any other quotations whose origins they would like me to attempt to trace?