Who Profits From Less Salt?

There is an attempt afoot in New York City and among various Federal agencies to significantly reduce the amount of salt in food. The idea is to make a healthier population, and that is certainly a worthy goal.
This won’t make everyone happy, of course. Chefs have already begun to grumble. Nor can the Salt Institute be pleased; its data show that food-grade salt sales have already been trending down over the past 10 years: 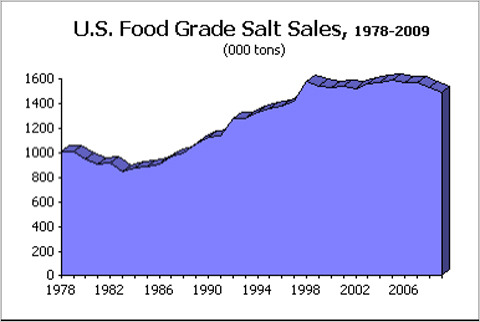 But who, I wonder, should be celebrating a low-salt future? There will certainly be low-salt winners for some food companies. But what substitutes will rise up to fill the void left by salt — as both a preservative and a flavor-enhancer? Will previously mild-mannered eaters learn to love Tabasco? According to this Boston Globe article by Sacha Pfeiffer, the American appetite has already gotten a lot spicier for a surprising reason: the large, aging Boomer generation who “are losing their ability to taste — and turning to spicier, higher-flavor foods to overcome their dulled senses.” Part of Pfeiffer’s proof:

“Thirty-five percent of all chain and white-tablecloth restaurants mentioned the word ‘spicy’ on their menus a decade ago; by last year that number had risen to 54 percent, according to MenuMine, a menu item database compiled by the Foodservice Research Institute in Oak Park, Ill.”

Question: who do you see most benefiting from a low-salt future, and what will you do to compensate?