Will the Icelandic Volcano Cool off the Planet?

As you’ve probably heard, a volcano in southern Iceland known as EyjafjÃ¶ll (or EyjafjallajÃ¶kull) has recently erupted, its first known eruption since 1823. (Here’s a look via webcam.) It has produced serious local flooding, but that’s not why it has made international news: westerly winds have spread the volcano’s ash plume across much of Europe, grounding thousands of airline flights and causing general distress and wonderment. 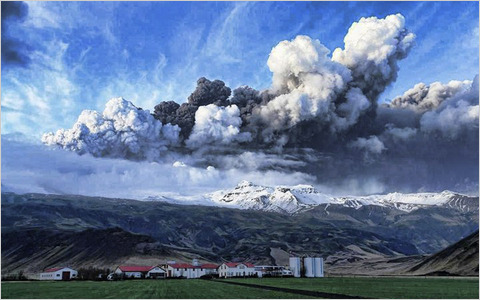 This has led several readers to send us e-mails asking if this eruption might cool the planet a bit. As we wrote in SuperFreakonomics, the gigantic eruption of Mount Pinatubo in the Philippines in 1991 sent so much sulfuric ash into the stratosphere that it reflected enough sunlight to cool global ground temperatures by about 1 degree Fahrenheit for the next two years. Other volcanoes further back in history have had even more drastic climate effects. That’s what inspired some scientists, including Nathan Myhrvold, to suggest that if global warming gets out of hand, one solution might be to intentionally distribute sulfur dioxide or some other reflecting material in the stratosphere, mimicking the cooling effect of volcanic eruptions.
The National Oceanic and Atmospheric Administration recently announced that this past March saw the warmest combined global land and ocean surface temperatures on record. “Additionally,” according to NOAA, “the planet has seen the fourth warmest January-March period on record.”
So has EyjafjÃ¶ll erupted just in time to cool things off?
At this point, the answer seems to be a firm no.
As disruptive as EyjafjÃ¶ll has been to air travel, it just isn’t that big of an eruption. “There will be some effect, but it would be small, and likely confined to northern Europe,” Myhrvold wrote in an e-mail message. “I don’t think that much has reached the stratosphere. However, in the past the volcano that is erupting was a precursor to another larger eruption, and if that happens then we may see some climate effect.”