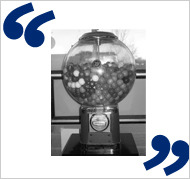 Each week, I’ve been inviting readers to submit quotations whose origins they want me to try to trace, using my book, The Yale Book of Quotations, and my more recent research. Here is the latest round.
frank asked:

One quote that comes up frequently in finance (I have also heard it applied to law) is along the lines of “Our most important assets take the elevators down, and walk out the front door every night.” I have never been able to source it.

The Yale Book of Quotations quotes Louis B. Mayer: “We are the only kind of company whose assets all walk out of the gate at night” (Quoted in Leslie Halliwell, The Filmgoer’s Book of Quotes [1973]).
DB asked:

How about “its crackers to slip a rozzer the dropsy in snide”?

The YBQ traces this to English mystery writer Margery Allingham. In her book The Fashion in Shrouds (1938), she used this sentence, which was slang for “It’s crazy to give a policeman an illegal payoff in counterfeit money.”
Eric Gunn asked:

Gerald Ford, according to Lyndon Johnson (the YBQ‘s earliest citation of the saying is from Richard Reeves‘s book A Ford, Not a Lincoln [1975], quoting LBJ referring to Ford as “so dumb he can’t fart and chew gum at the same time”). Johnson’s version presumably was cleaned up to “walk and chew gum.” You are right that it is easy to walk and chew gum simultaneously; the point of the expression is that it’s very easy, such that only an exceptionally incapable person has trouble with it.
gwb asked:

There are a number of precursors to Kennedy’s great line (since speechwriter Ted Sorensen admantly refuses to accept credit for the line, we might as well attribute it to Kennedy). The earliest cross-reference by The Yale Book of Quotations is the following:

“We pause to become conscious of our national life and to rejoice in it, to recall what our country has done for each of us, and to ask ourselves what we can do for our country in return.”
Oliver Wendell Holmes, Jr., Memorial Day Address, Keene, N.H., May 30, 1884