If You Have to Be Wrong, How Can You Admit It More Easily? 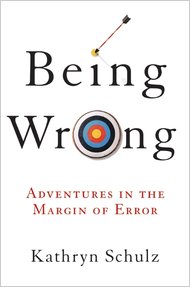 Earlier this month, Kathryn Schulz, the author of Being Wrong, wrote a guest post about the perils of admitting wrong-doing. Now she’s back with another post, this one about how to change our attitude toward wrongness by making it easier to admit error.
Crowd-Sourcing a Better Response to Being Wrong
By Kathryn Schulz
Listening to BP CEO Tony Hayward dodge and duck during last week’s congressional inquiry into the explosion of the Macondo oil well in the Gulf of Mexico, I was struck all over again by our stunning, culture-wide inability to face up to ignorance, failure, and mistakes.
That inability is particularly evident up in the power stratosphere, where admissions of error are made rarer by (among other things) threats of litigation, fear of the wrath of voters or shareholders, and a value system that generally prioritizes certainty and ego over curiosity and humility.? But this problem is hardly limited to our political, military, economic and corporate leaders.? On the contrary: our society as a whole has completely neglected to master the art of acknowledging our mistakes.? In fact, we haven’t even mastered the basic skill of saying “I was wrong.”
This is a startling deficiency, given the simplicity of the phrase, the ubiquity of error, and the tremendous public service that acknowledging it could provide.? Instead, what we have mastered are two alternatives to admitting our mistakes that serve to highlight exactly how bad we are at doing so.? The first involves a small but strategic addendum: “I was wrong, but…” – a blank we then fill in with wonderfully imaginative explanations for why we weren’t so wrong after all.? The second (infamously deployed by, among others, Richard Nixon regarding Watergate and Ronald Reagan regarding the Iran-Contra affair) is even more telling: we say “mistakes were made.”? As that evergreen locution so concisely demonstrates, all we really know how to do with our errors is not acknowledge them as our own.
How do we go about changing that?? It would be nice if we could all just start saying “I was wrong” more openly and readily – but if that’s the end we want, it cannot also be the means to get us there.? (Not to mention that if it were that easy, we’d hear a lot more of those admissions in the first place.)? Cultural shifts aren’t created by wishful thinking, and they aren’t created out of whole cloth, either.? As James Bagian, head of the Veterans Administration’s National Center for Patient Safety, told me, “You don’t change the culture [of denial and blame around error] by saying, ‘Let’s change the culture.’? You change the culture by giving people new tools that actually work.”
Such tools exist.? Bagian’s own field, medicine, has lately started trying to arm its practitioners with the means and skills to face up to their mistakes. When the VA learned that the major reason clinicians didn’t report errors wasn’t fear of legal action but a feeling of humiliation, they circulated a definition of “blameworthy” harm to a patient that limited such cases to those involving assault, the use of illegal substances, or intentionally attempting obviously dangerous procedures.? The result?? Error reporting shot up 30-fold.? That’s good news for patients: better error reporting translates to fewer errors, since you can’t prevent problems when you don’t know they’re happening.? As a result, these kinds of cultural tools turn out to be at least as important for reducing medical error as improvements in technology or information.
Nor are such tools limited to domains like medicine.? During the years I’ve spent thinking about wrongness, any number of people have shared with me their own, homegrown strategies for breaking the habit of defensiveness and denial.? In response to my last post on this blog, for instance, one group of college friends wrote in to say:

After three years of arguing with each other, we implemented a system.? When someone said something that was clearly wrong or out of place, that person had to say “I was wrong.”? The other four would applaud for that person, and then it was over.

Sometimes, too, we can use our dislike of being wrong against itself.? Responding to an NPR appearance I made, one woman wrote in to say:

Years ago, I stumbled on a phrase that improved me as a parent and a spouse.? It’s an especially useful phrase because it’s usually true.? It adds a little rueful humor and it diffuses tension.? I find myself using it a lot: “I hate it when you’re right.”

In a similar vein, the Chicago Public Radio show “This American Life” once ran an episode about a fictional magazine called “Modern Jackass” – which is what you appear in when you find yourself staking claims about subjects you know nothing about.? As in: “You know all that stuff I just said about the Ottoman Empire?? That was part of my cover story for Modern Jackass: Turkish Edition.”? Host Ira Glass compared the phrase to Post-It Notes: you have no idea how much you need it, but once you have it, you use it all the time and can’t believe how much easier it makes your life. Meanwhile, some people have developed tools for responding to other people’s errors rather than their own.? One such person reports that he and his housemates have a rule that each of them only gets one “I told you so” per friend per lifetime – a policy designed to ensure that you think long and hard before deciding to crow about your own rightness and the wrongness of your friends.
So readers, here’s my challenge for you: what successful tools have you developed for facing up to your own ignorance, failures and mistakes?? What policies or practices have you put in place in your home or your workplace to cultivate a healthier and more productive attitude toward error?? What do you do – and what could all the rest of us do – to face up to wrongness more gracefully than Tony Hayward?