Quotes Uncovered: The Exception to the Rule, Clubs and Spears 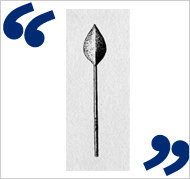 Each week, I’ve been inviting readers to submit quotations whose origins they want me to try to trace, using my book, The Yale Book of Quotations, and my more recent research. Here is the latest round.
ardyanovich asked:

“The exception that proves the rule.” Not only would I like to know the origins, I would love to know what it means.

Ah, one of the great examples of a widely misunderstood saying, but a saying that has people passionately adhering to their misunderstanding of it. The Yale Book of Quotations has this entry:

“The exception proves the rule.”
John Wilson, Cheats (1664). This is perhaps the most misunderstood of proverbs. It is widely believed to mean, illogically, that a rule is proved by examples contradicting it. Others believe that the word “prove” is used here in an archaic sense of “test.” In reality, the meaning is that the very fact of there being an exception proves the existence of a rule. The Oxford Dictionary of Proverbs cites G. Watts, Bacon‘s Advancement of Learning (1640) (“exception strengthens the force of a law in cases not excepted”) and refers to a Latin maxim, exceptio probat regulam in casibus non excepts (the exception confirms the rule in cases not excepted).

It’s always been my understanding that the rock-and-roll ethos “it’s better to burn out than to fade away” started with Neil Young on the song ‘Hey Hey My My’ first released in 1979 (later revived in infamy when the quote was used in Kurt Cobain’s suicide note). But in full disclosure, I wasn’t even born yet in 1979, and several people who were not only born but full-fledged adults by then have told me that they remember the phrase pre-’79, even going back as far as the late ’60s. Can anyone verify for me either way?

According to The Yale Book of Quotations, this quotation, or at least a version of it, goes back to the ’80s — the 1780’s, that is. Richard Cumberland was quoted in Joseph Cornish, The Life of Mr. Thomas Firmin, Citizen of London (1780): “A man had better wear out, than rust out.”
Preston Riley asked:

I don’t see how Shapiro e-mailed Nelson Polsby, given that Polsby died in 2007. Another Jayson Blair at the Times?

I’m not sure why this is so impossible, given that I wrote “I e-mailed Wolfinger a few years ago … I also e-mailed Polsby.”
Matt Zimmerman asked:

How about: “I don’t know what sorts of weapons will be used to fight World War Three, but World War Four will be fought with clubs and spears.” I’ve seen it attributed to both Einstein and Isaac Asimov. I suspect it is the latter.

The Yale Book of Quotations cites Einstein in a 1949 interview saying “I do not know how the Third World War will be fought, but I can tell you what they will use in the Fourth — rocks!” However, the all-knowing YBQ goes on to note that “educator P. W. Slosson is quoted as saying ‘World War IV will be fought with bows and arrows’ in Washington Post, July 16,1948.”
Do any readers have any other quotations whose origins they would like me to attempt to trace?