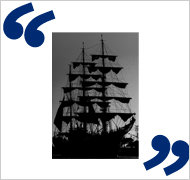 Thucydides never actually said “A collision at sea can ruin your entire day” in his work The Peloponnesian War, but it is attributed to him. Do you have any information on where this apocryphal citation began?

Herb Caen of the San Francisco Chronicle wrote about this on Feb. 14, 1971. He said:

THAT ALLEGED quote of Thucydides — “A collision at sea can ruin your entire day” — popped up all over the place in the wake of the Standard Oil spill, sometimes with the last word cleverly changed to “Bay” — and now it turns out that the great Greek historian (c.460-c.400 B.C.) never said it. It’s funny: Navy Capt. W. B. “Bill” Hayler of the Calif. Maritime Academy in Vallejo confesses he made it up while a student at the Naval War College in 1960. “We had a history prof who was absolutely hooked on Thucydides,” he says. “Quoted him all day long. So I concocted that one and told everybody it was from Volume IX of the Peloponnesian War. Of course, Thucydides only wrote eight volumes. When I took command of the USS Buck in ’60, I had it posted on the bridge — and then things began to get out of hand. Readers Digest picked it up in ’62 and paid me five bucks. And when the Navy published ‘Farwell’s Rules of the Road,’ they used the quote in all their ads. The editor was horrified when I told him it was a phony, but I think they’re still using it.”

Can any of our database jockeys shed any light on the veracity of the Hayler account or the earliest findable usage of this quotation? And I would welcome any input on whether this is a famous enough line that it should be included in the next edition of The Yale Book of Quotations.

Winston Churchill is said to have said, “The Royal Navy runs on Rum, Buggery, and the Lash.” Or something like that. True? If so, when and where did he say it? If not true, did someone else say it (before me, I mean). If true, it would suggest that there was one important Conservative military man of the 20th century who didn’t object to homosexual acts in the military. Of course, it appears he didn’t object to drunkenness or severe corporal punishment either.

The Yale Book of Quotations has the following:

I have not researched this before. Another challenge for the Google Books / Google News / Newspaperarchive searchers?

Winston Churchill did not coin the quotation about naval tradition. According to the definitive book of Churchill quotations, "Churchill by Himself", edited by Richard M. Langworth, in 1955 his private secretary, Anthony Montague Browne confronted Churchill with this quotation. "I never said it. I wish I had," responded Churchill.

How about "Absence of evidence is not evidence of absence"? First, it's nonsense: of course the lack of signs is evidence. It is just not proof. The distinction is lost on fuzzy minds.

Second, I saw it recently cited in Discover magazine as being from Carl Sagan. But I distinctly recall its being used (disingenuously, or is he really that stupid?) by Rumsfeld in reference to Saddam Hussein's supposed caches of weapons.

Not only should its origins be rooted out, but the phrase itself should be uprooted.

do you know the origin of the term 'love handles"

The first time I encountered "Absence of evidence is not evidence of absence" was in a review article about the search for extraterrestrial intelligence in an article published in the Memoirs of the Royal Astronomical Society long before Carl Sagan became a celebrity. I wish I could give you the name of the author and the year of publication but it was so long ago my memory fails me.

@3: "Absence of evidence is not evidence of absence." I believe that this was used in Sagan's book Cosmos, in reference to searching for extraterrestrial life despite a lack of evidence for it. I don't have a copy of the book handy, so I can't confirm my recollection. I also don't know whether it was used in the PBS series. (As much as I like the book, I found the series unwatchable.)

One Thermonuclear explosion can ruin your whole day.

One Vuvuzela can ruin an entire soccer match.

One doctor saying, "Congratuations, its Octoplets!" can tighten a million sphincters.

The Glacialists' magazine - Page 132
Glacialists' Association - 1895
... it has been remarked by Mr. Dugald Bell that " absence of evidence is not evidence of absence."

There's clearly a preference for triplets in quotations. Consider Churchill's "rum, sodomy, prayers and the lash" and "blood, toil, tears and sweat." Both were shortened by one in the popular mind.

Was George Washington the first to find the "whistle of bullets" pleasing?

There is evidence that W.B. Hayler had a sign on the U.S.S. Buck and tried to popularize the quotation attributed to Thucydides. Here are two cites in the early 1960s.

The "United States Naval Institute Proceedings" is a publication that leavens its serious mission with the occasional light touch. Recently it quoted, from the wardroom notice-board of the USS BUCK, a comment originated by, THUCYDIDES, the Greek Historian (471 to 400 B.C.). It reads-and who can gainsay its truth-"A collision at sea can ruin your entire day."

Ceolaf asks about a quotation that begins "Not everything that counts can be counted". I posted about this at my blog "Quotation Investigator". After searching I found that the best information was located by someone working on WikiQuote. The earliest known cite for the aphorism is a textbook on sociology by William Bruce Cameron. Of course some reader of this blog may find something earlier.

I had read that the phrase "Balls to the walls" is actually a term used from old locomotives. Is that true?

Its pretty clear that Hayler was somewhat of a joker - he made every effort to spread the fake quote, THEN tell the editors in question that they had been pranked. Of course, from his point of view, the Volume 9 aspect was such a smoking gun that folks deserved to be fooled if they weren't at least passingly familiar with the classics.

I approve of both his worldview and sense of humor.

I read many years ago the the term "Absence of evidence is not evidence of absence" was often used and often guided a French criminologist who was famous for his revolutionary methods of crime investigation in 19th century Paris.