Quotes Uncovered: Fog of War and Showing Up 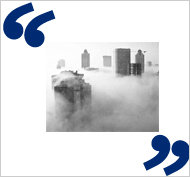 Each week, I’ve been inviting readers to submit quotations whose origins they want me to try to trace, using my book, The Yale Book of Quotations, and my more recent research. Here is the latest round.
Travis asked:

Where does the phrase “fog of war” come from, and what was it originally intended to refer to?

The Yale Book of Quotations has the following entry:

“War is the realm of uncertainty; three-quarters of the factors on which action is based are wrapped in a fog of greater or lesser uncertainty.”
Karl von Clausewitz, On War bk. 1, ch. 3 (1832-34). Perhaps the closest Clausewitz comes to using the expression “the fog of war,” which is often attributed to him. Jay M. Shafritz, Words on War, quotes Chevalier Floard, Nouvelles Decouvertes sur la Guerre (1724); “The coup d-oeuil is a gift of God and cannot be acquired; but if professional knowledge does not perfect it, one only sees things imperfectly and in a fog.”

“Ninety-six percent of success is just showing up. …” Woody Allen
Of course, the number is 80% and it is from the film Annie Hall in 1977. My intention in commenting on it was to introduce the notion that numbers in quotes have a way of floating around.
I can’t find anything earlier, so it might be a clever invention of Woody Allen’s, but as pure speculation he may have read “New Dimensions” Robert Silverberg – 1972
‘… ninety-nine percent of life is sheer abstraction….’
Only a guess, but the time is about right.

The earliest version found by The Yale Book of Quotations was “Showing up is 80 percent of life,” which appeared in The New York Times, Aug. 21, 1977 (attributed to Allen). I have never seen any reference to this saying being used in Annie Hall; any reader who knows that it is used in that film, please let me know where in the film it occurs.
Do any readers have any other quotations whose origins they would like me to attempt to trace?