Quotes Uncovered: On Tools and Problems 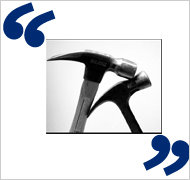 Each week, I’ve been inviting readers to submit quotations whose origins they want me to try to trace, using my book, The Yale Book of Quotations, and my more recent research. Here is the latest round.
Francois asked:

We were wondering recently who first said “If the only tool you have is a hammer, every problem looks like a nail.”

The Yale Book of Quotations traces this to Abraham Maslow, The Psychology of Science: A Reconnaissance (1966): “It is tempting, if the only tool you have is a hammer, to treat everything as if it were a nail.” However, Charles Doyle of the University of Georgia has found versions of it further back, the earliest usage being by Abraham Kaplan in 1962. Details will appear in the forthcoming Yale Book of Modern Proverbs.
Do any readers have any other quotations whose origins they would like me to attempt to trace?