The Age of Prohibition: Bring Your Questions for Daniel Okrent 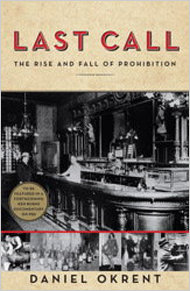 For 14 years in the early 20th century, the 18th amendment to the U.S. Constitution prohibited “the manufacture, sale, or transportation of intoxicating liquors within, the importation thereof into, or the exportation thereof from the United States.”
Daniel Okrent‘s Last Call provides a fascinating narrative history of Prohibition. He explains, among other things, how people managed to drink so much despite the weight of a constitutional amendment:?”much of it was sanctioned by the Volstead Act, in the form of ‘medicinal liquor’ (doctors sold prescriptions for three bucks each), ‘sacramental wine’ (which, in some instances, was stretched to include sacramental brandy and Champagne), and ‘preserved fruit’ (aka hard cider and applejack).”
Okrent explores how “a freedom-loving people decide[d] to give up a private right that had been freely exercised by millions upon millions,” and explains how Prohibition affected trade, boat design, and the English language. Oh yes: it also led to the creation of “the first nationwide criminal syndicate, the idea of home dinner parties, the deep engagement of women in political issues other than suffrage, and the creation of Las Vegas.” He even probes the effects of Prohibition’s on abortion and the doomed Equal Rights Amendment.
Okrent is the author of several earlier books, the creator of Rotisserie League Baseball, was the N.Y. Times‘s inaugural public editor, and the founding editor of the long-gone but still-beloved New England Monthly magazine. He has agreed to answer your questions about his new book, so fire away in the comments section below. As always, we’ll post his answers in due time.
Update: Okrent responds to your questions here.