Battling Malaria: Bring Your Questions for Sonia Shah, Author of The Fever 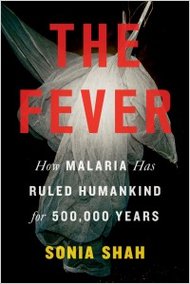 Malaria has been infecting and killing humans for many millennia, yet it continues to elude man’s efforts to control it. Sonia Shah‘s fascinating new book, The Fever: How Malaria Has Ruled Humankind for 500,000 Years, describes our long relationship with the disease:

These days, mosquitoes infect between 250 million and 500 million people with malaria every year, and close to 1 million perish. Equally shocking is the sheer length of malaria’s tenure upon us. Humans have suffered the disease for more than 500,000 years. And not only does it still plague us, but it has also become even more lethal. That’s quite a feat for a disease we’ve known how to prevent and cure for more than a hundred years. During that same time, we’ve vanquished any number of similarly once-commanding pathogens, from smallpox to the plague, and have come to expect nearly complete control over newer pathogens, such as SARS or avian flu….Yet despite the fact that we’ve known about malaria since ancient times, and have the drugs, killing chemicals, and know-how to avoid it, something about this disease still short-circuits our weaponry.

Shah explores the history of the disease and explains why malaria hasn’t “mellowed” with age (like other diseases have) and why humans haven’t adapted to the disease. She explains why our many efforts to conquer the disease — the drugs and DDT “spray-gun wars” of the 1950’s – have failed so miserably, and she offers the following, rather depressing conclusion:

No one can accuse us of lack of diligence in our devotion to the magic-bullet cure, the miracle drug, the wonder pill. And yet, though antimalarial drugs are ‘one of humanity’s most precious and cost-effective public health resources,’ as the nonprofit Medicines for Malaria Venture puts it, it’s useful to remember this: even if we somehow got our act together to unleash the full power of our antimalarial drugs upon the malaria parasite, we still wouldn’t win.

Humans, who often fail to comply with simple measures like sleeping under treated bed nets, don’t get a free pass either, in a comparison that will resonate with readers of SuperFreakonomics:

Shah has agreed to answer your questions about her new book, so fire away in the comments section and, as always, we’ll post her answers in due time.
Addendum: Shah answers your questions here.