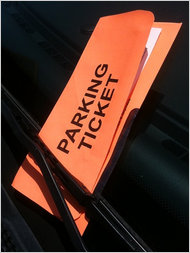 A couple weeks ago, I became briefly fascinated and somewhat appalled by the appearance of a new Internet business that offered a sort of insurance against speeding tickets. In return for an annual fee of $169, ticketfree.org promised to reimburse you for the costs of up to $500 in moving violations. Its webpage enthused:

The first reaction of any economist would be that ticketfree.org faces an enormous moral hazard problem. People who are insured against the cost of speeding tickets are more likely to speed. To be a viable business, the insurer has to hope that the hassle of being stopped, incurring “points” toward the suspension of your license or “demerits” on your auto insurance, and the cap of $500 will stop the average person from receiving more than $169 (the premium) in annual tickets.  (Ticketfree.org was smart not to cover parking tickets. Because parking tickets don’t result in the hassle of a police stop or the accumulation of “points” like speeding tickets do, people like me would react to parking insurance by massively increasing the number of our parking violations.)
The first reaction of any lawyer would be that ticketfree.org faces an enormous set of legal risks. Can you imagine the tort lawsuit that would arise if a ticketfree.org customer killed someone while speeding? This is a contract that is likely to be void against public policy.
The company was not blind to these moral and legal issues. The promotion materials made clear that the intent was not to induce reckless driving, and the terms of use excluded from coverage a variety of more flagrant offenses:

Drug or alcohol related matters, hit-and-run related charges and unmeritorious cases are excluded from membership coverage. Also, the service does not apply to incidents involving manslaughter, involuntary manslaughter, negligent homicide, or vehicular homicide. Also excluded are acts or omissions performed in the commission of any crime under the laws of any jurisdiction.

The exclusion for “unmeritorious cases” is an unfortunately imprecise phrase. I imagine that ticketfree.org intended to exclude unmeritorious claims — that is, claims for which the insured was not in fact ticketed — but it might be interpreted to mean that if the police bring an unmeritorious case against a ticketfree.org client, the company has no duty to reimburse.
But the larger question is whether the law should countenance contractual attempts to blunt the deterrence effect of criminal law. Barry Nalebuff and I once defended Acme Rental Car (in a New York Times op-ed) when it tried to charge renters an extra fee of $150 if they were caught speeding while driving an Acme rental. In our minds, supplementing a state speeding penalty is just fine because neither the state nor Acme wants renters to speed.
Ticketfree.org was doing the opposite. For a fee, they were reducing the marginal cost of speeding and hence exposing the general public to more dangerous driving behavior. (I’ve written about a similar flipping with regard to gasoline prices. In a world where overconsumption of gasoline has negative geopolitical and environmental impacts, it would be appalling to let consumers buy gasoline insurance that let them drive as much as they want at a subsidized price. But GM and others have come close to this when they’ve offered to subsidize gas prices if you buy a new car from them. It is much better to offer to pay people a “prebate” if they will agree to a higher marginal gas price.)
The law traditionally prohibits insurance for intentional wrong doing. The terms of use are too cute by half when they claim:

Ticketfree.org is not an insurance company. It is an auto club.

Mere characterization should not be sufficient to avoid the application of common sense requirements for the provision of insurance.
But speeders beware before you click through and try to sign up. The ticketfree.org site is no longer live. While I was writing this post, the nicely appointed pages were abruptly taken down and the URL is no longer active. My emails and phone messages to their customer service department remain unanswered. Was it an elaborate hoax? Inquiring minds want to know: what caused ticketfree.org to close its virtual doors? I guess some ideas are too good to be true. (We will happily send some Freakonomics swag to the commenter with the best info on the company’s current status and what brought about its demise.)
(Hat tip: Peter Siegelman)