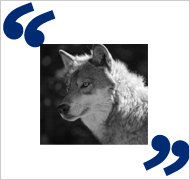 Each week, I’ve been inviting readers to submit quotations whose origins they want me to try to trace, using my book, The Yale Book of Quotations, and my more recent research. Here is the latest round.
Beth asked:

Garson O’Toole has traced a version of this back to 1990. He found the line “Democracy has been described as four wolves and a lamb voting on what to have for lunch” in the Los Angeles Times, Nov. 25, 1990.
Gene asked:

The Yale Book of Quotations traces an earlier saying, “A man without faith is like a fish without a bicycle,” to Charles S. Harris in a college newspaper, the Swarthmore Phoenix, Apr. 7, 1958. The YBQ cites People, July 26, 1976, as the earliest known printed documentation for “A woman without a man is like a fish without a bicycle,” noting that the 1976 reference gives a T-shirt worn by Gloria Steinem as the source. The amazingly helpful YBQ goes on to note: “Steinem has credited Dunn [Australian educator, journalist, and politician Irina Dunn] as the originator. Dunn says she wrote ‘A woman needs a man like a fish needs a bicycle’ on two toilet doors in Sydney, Australia, in 1970, paraphrasing ‘A man needs God like a fish needs a bicycle.'”
Do any readers have any other quotations whose origins they would like me to attempt to trace?