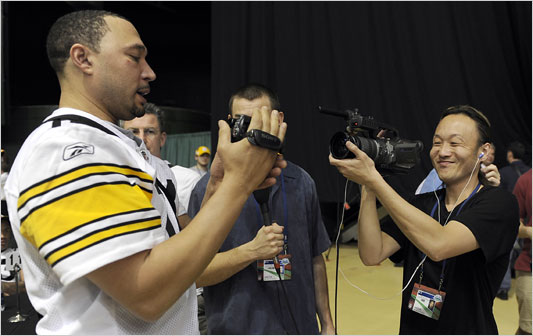 Correct me if I’m wrong – I couldn’t find mention of it anywhere – but as the NFL season opens, the Pittsburgh Steelers would seem to be the only team that’s ever had three black quarterbacks on its 53-man roster: Dennis Dixon, Byron Leftwich, and Charlie Batch.
This will only be the case until the Steelers’ regular QB, Ben Roethlisberger, returns from his four-game suspension. I can think of plenty of NFL teams with two black quarterbacks – McNair/Young, McNabb/Vick, Garrard/Leftwich – but none with three. Any help?
FWIW, the Steelers’ emergency QB, if all the others were to fall (and Leftwich is already injured), is Antwaan Randle El, a wide receiver who played quarterback in college – and is also black.
And if things got really bad, I’m guessing the Steelers would turn to receiver Hines Ward, another former college QB (who is also black). Honestly, I would love to see that, since the hit-happy Ward would probably try to sack a sacker.
All this is particularly fitting for a team that boasted one of the first premiere black quarterbacks in the league, the late Joe Gilliam.