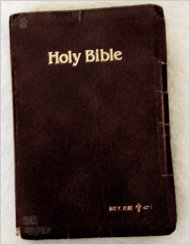 Genesis 20:1-18 tells of Abraham visiting Avimelech and offering him Sarah (who, so Abraham tells Avimelech, is his sister, when she is also his wife). Despite Avimelech’s ignorance of the true relation between Abraham and Sarah, and despite the fact that he hasn’t slept with Sarah, G-d is angry at him and renders the women of his household sterile. G-d asks Avimelech to free Sarah. Presumably, the men in Avimelech’s household are not happy about their wives’ infertility, which causes Avimelech trouble.

Avimelech does not have a?dominant strategy, nor does G-d.? But G-d doesn’t play strategies – he gets what he wants from people and causes them to do the right thing.? Avimelech knows this too.?Knowing that G-d will make the women in his household fertile again if he frees Sarah, and knowing that his best position is freeing her and having fertile women in the household, he does so.? (Free, Fertile) is a?Nash equilibrium, and all ends well.

God. I just had to get that off my chest.

The more interesting thing about this is why do you choose to bleep out the word God? Especially when you're talking about the Bible.

Avimelech's situation is a lot worse than that.

The Abrahamic deity is concerned only with obedience, not with anything else. Just as Avimelech reaches the decision to free Sarah, having deduced that this constitutes obedience to the A.d.'s wishes, the A.d. could very well change its mind and punish him for freeing her instead of keeping her. Not being one of the bunch of randomly selected Israelite prophets, Avimelech has no way of knowing.

There are many examples of this (Henry VIII got a lot of mileage out of one of them), but the starkest is how, at one point, the Israelites are commanded never to make graven or molten images, and then only a few years later, still in the desert, ordered to make brazen serpents and worship them.

Referring to the Biblical entity as "G-d": Ah! The mark of genius!

I don't know if everyone understands that our Jewish brethren, out of respect to the Almighty, choose not to spell His Name completely. I hope you will pardon me, a Christian, for proceeding as we normally do.

You will recall, no doubt, that Sarah WAS Abraham's sister--his half-sister (I think of the same father). So he told a little half-truth in order to save himself.

One "game theory" that I thought was well played was when King David sinned. God offered the Hobbesian choices of 3 years of famine, 3 years of decimating war, or days of "the sword of the Lord."

Instead of making a choice, David threw himself at the mercy of God, taking the third choice by saying, (1 Chr 21:13 KJV) "...let me fall now into the hand of the LORD; for very great are his mercies: but let me not fall into the hand of man."

And from the account, apparently God stopped his punishments before it was completely fulfilled--or at least there was indeed some element of mercy extended.

Maybe the thing we can learn for game theory is that there may be some way to choose "beyond" the choices given...that gives a more positive outcome.

In any case, an enjoyable read.

He's probably Jewish, and doesn't want to use the name of the supreme being. He's using the Bible instead of the Torah recognizing his reader is more likely to be acquainted with the Bible, even though this story is in the common part of the two. It makes sense to me.

Where is the part where God causes people to do the right thing? It sounds like Avimelech was lied to and innocent woman and men were punished. Why did Abraham offer his wife? I assume it was some kind of trade. If it was a trade did Abraham give back what he got in exchange?

I and probably many other readers do not know how to interpret the numbers in the payoff bi-matrix. Could someone kindly provide a link to an explanatory page?

Let's ignore for a second the problem that you and I, as a mere creatures, cannot possibly aspire to know what goes inside G-d's mind. Is it resonable to give G-d zero value in having fertile women when Sarah is around? What about "Be fruitful and multiply?"). Only if you reverse engineer G-d's supposed action (which is cheating, IMHO).

Also, that Avimelech loves Sarah less than he cares for the contraceptive status of other women is, again, reverse engineering.

So, I think what we have here is a case of what we call in consulting "keep hammering the spreadsheet until it gives the results you want it to". Excel has an automated procedure for that: GoalSeek.

Predicting the past is an exact science, indeed.

Jewish tradition, you don't write out the name of the deity so you use a title or write G-d. Some people who are not Jewish choose to do this out of respect for others. In fact, Cardinal Arinze, one of the Vatican's theology experts, has recently requested that in liturgical prayers and songs, Catholics also not prounounce the Hebrew name for the Lord (the one that begins with Y, the tetragrammaton or "four letters" in Hebrew, or Anglicized with vowels). This was the practice until recently, when the Y name has crept in, especially in one popular hymn which should change to "Lord, I know you are near..."

I remember that a while back there was a discussion on whether "G-d" on the computer screen was necessary or whether using all three letters was OK since it wasn't physically written. Is there a consensus on this or do different traditions approach it differently?

I disagree with payments.Best situation for Avi is to keep Sarah and the women fertile. But whatever it changes nothing.

The payoff matrix doesn't look right to me. Unless I've misunderstood the story, surely Keep/Fertile is a better outcome for Avimelech than Free/Fertile? Currently they are 8 and 10 respectively.

In that case Avimelech *does* have a dominant strategy, which is to keep Sarah. Only his confidence in God's cooperation allows him to make the choice to free her.

I am consistently disappointed in the lack of rigor, depth and insight in posts by Prof. Hamermesh. They have an unprofessional quality I don't observe in most other Freakonomics contributors.

I always thought you have to be above average in intelligence to practice polygamy or keep a mistress or two or three.

It is a game with multiple variables, bets, bluffs, and positions. Who can keep track of all the lies and various states of information? It'll give you an ulcer. Sometimes it is better to stay in the Chilean mineshaft.

The word G-d is not being bleeped out.
In the Torah G-d has no name, I am what I am He says.
In the Jewish Tradition it has always been the custom to spell the name this way.

Why is Avimelech's payoff from freeing Sarah higher than from keeping Sarah, given that God chooses the action "Fertile"? Following the conventions of payoff matrices, the first number in each couplet in the first column should display Avimelech's payoff assuming that God's action is a foregone conclusion. It seems logical that if God's action is "fertile", Avimelech should keep Sarah (and have his cake and eat it, too, so to speak). Or am I misunderstanding the final paragraph, where you state that God doesn't play strategies?

Because he is Jewish, probably. They think it's sinful to say God's name, because it's holy. In my opinion God isn't a name, it's a title.

This story is so much more interesting than you make it!

"God" is an English noun, like "Dios" is a Spanish noun - neither is a name, and so omitting the o is just silly. The name of this god is "Yahweh", we say "Jehovah" or "Jove" in English - this is the god whom Thursday ("giovedi") and the planet Jupiter are named. Avimelech is also a title, not a name.

If Avimelech wasn't sleeping with his wives, how would he know whether they were infertile? Or was he the only chaste one in his household (kingdom)?

And what does "freeing" Sarah mean - selling her back to her brother? Then why does Avimelech pay Abraham?

And if Jove controls everything, why does he need to bargain with Avimelech anyway? And why doesn't he punish Abraham, the liar who sold his own wife?

This story actually dates to the era of Yuya, the biblical Joseph, who was vizier of Egypt around 1390BC. As a foreigner, he was unpopular, especially when his daughter became Great Royal Wife (and thus her son would be the future Pharaoh, Tutankhamun). So he made up a story claiming that his grandfather Isaac was the son of Pharaoh, so he was a homeboy after all. This story was recorded in the scriptures.

Years later, after the exodus, when the Israelites were looking for a justification for their conquest of Canaan, it was no longer convenient to be descended from Pharaoh. Now they needed to be descended from Abraham, with a covenant promising them that land. So they rewrote the story to explain how Isaac was REALLY the son of Abraham, Sarah's 900-year-old brother. Yeah, right.

This also explains why Ishmael wasn't Abraham's heir, even though he was firstborn, and why Jacob got Isaac's "birthright" even though Esau got all his stuff.

A lot of folks (particularly Jews) believe that you should never spell out the full name. They'll do the same with other variants of it as well, such as Y-hw-h.

I suspect there's some context here that I'm missing. What do the numbers in the matrix represent?