The Limits of Human Performance: A Q&A With John Brenkus 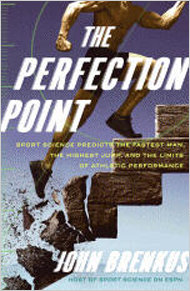 Every year, athletes break records and accomplish physical feats previously thought impossible. But is there a way to know the upper bound of such accomplishments?
John Brenkus, the host of ESPN’s?Sport Science series, has just published a book called?The Perfection Point, which uses statistics and experiments to answer that question. Brenkus looks at basketball dunking, bench pressing, and speed, trying to find “the ‘perfection point‘-a speed, a height, a distance that humans can get closer and closer to but never exceed.”
In one recent article, Brenkus described his approach: “Our method involved starting with the current world record holder in each discipline, breaking the activity down into its basic components, then using hard science to determine how much improvement was possible in each of those components.”
Brenkus has agreed to answer your questions about his new book, so fire away in the comments below and,?as always, we’ll post his answers in good time.