You’ve probably heard the?latest marriage narrative: With the recession upon us, young lovers can’t afford to marry.? As appealing as this story is, it has one problem: It’s not true.
I have?an op-ed in today’s New York Times, making this point at length.? But sometimes a picture does a better job.? Here’s the marriage rate, measured as new marriage certificates issued each year, per 1000 people.? The grey bars are recessions. 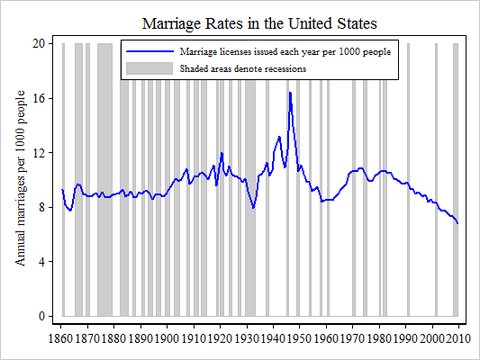 If marriage declines during a recession, you should see the blue line head a bit further south during grey periods.? But we don’t see any systematic pattern.? In fact, the marriage rate appears amazingly insensitive to the business cycle.
To an economist, it isn’t surprising that marriage remains popular during a recession-after all, a working spouse provides wonderful insurance against an income hit.
The New York Times (among?others)?reported that the “long-term decline in marriage accelerated during the severe recession.”? Is this true?? Let’s zoom in on the past 30 years to see if there’s any extraordinary movements evident in the latest data: 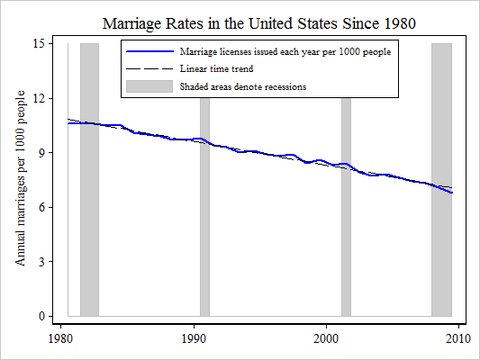 Nope.? It turns out that the?data for 2009 are as boring as the numbers for each of the past thirty years.? If you squint, you might see a tiny?blip in 2009.? But it’s tiny and the sort of blip that you see in any other year.? And it also turns out that the marriage rate was above the trend line in the previous two recessions.? The real story here is that the marriage rate is sticking doggedly to the trend line.
There is still an important question as to what is driving the decline in marriage.? But equally, let’s not overstate the implications of the declining marriage rate.? Right now, 81?percent of all Americans have married at least once by age forty.? That is, marriage remains a central institution in American life.
So what has driven the largely misplaced commentary about the recession leading to a decline in marriage?? As usual, it’s all about understanding the data.? Many reports focused on the?proportion between 25 and 34 who are married.? But that’s crazy.? First, with the?median age at first marriage rising to 28 for men and 26 for women, tons of these folks are yet to marry.? And second, the number of wedding rings tells us a lot about decisions made many years prior, and almost nothing about today’s trends.
You can read the full op-ed?here, which also sketches out my research with?Betsey Stevenson describing what we think is a new model of marriage-“hedonic marriage“-which is based on consumption complementarities.? You might also ask: Given that Betsey is a co-pilot on all this research, why isn’t she a co-author of the op-ed? Well, she’s spending this year?serving as Chief Economist of the Labor Department, and while she’s free to talk about the administration’s labor policy, this leaves me to talk about?family economics.? So perhaps there’s something to production complementarities after all.