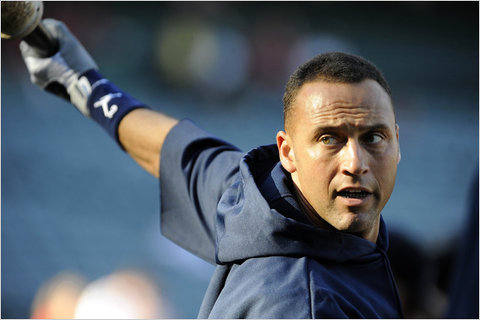 While the New York Yankees’ 2010 season came to a disappointing close, it would still appear inevitable that the team will want to re-sign Derek Jeter, its franchise shortstop. But it appears just as inevitable that his on-field performance isn’t worth nearly as much as he will likely want to be paid.
That said, he and the Yankees have a deep and valuable symbiotic business relationship. So someone might need to get creative. If you were charged with crafting a fair, wise, rational contract going forward between Jeter and the Yankees, what would that contract look like in terms of dollar value, term, incentives, etc.? Or, if you’d rather, what would you ask for if you were Jeter? Or if you were the Yankees?
If I were Jeter, here’s what I might propose: a salary of just $1 a year to play for as long as I’m valuable, along with a lifelong personal-services contract in exchange for, say, a 5 percent stake in ownership of the team. (One estimate has the Yankees worth about $1.3 billion, so a 5 percent share represents $65 million at the moment.) That’s a starting point; there’d be a la carte provisions as well – perhaps, for instance, if we mutually decided I should serve as player-manager next year.
We asked some smart baseball people the following question:

Given Jeter’s history with and value to the New York Yankees, his pending free agency (at age 36), and the public-relations cost of LeBron James‘s very noisy departure from the Cleveland Cavaliers, what kind of deal would you suggest Jeter and the Yankees make?

Here are their responses:
Maury Brown is the founder and President of the Business of Sports Network.

“The Yankees have a conundrum: How can you be reasonable with the face of an organization when he’s coming off the worst year of his career?”

The Yankees have a conundrum: How can you be reasonable with the face of an organization when he’s coming off the worst year of his career? With Derek Jeter’s 10-year, $189 million contract set to expire this off-season, the question may well be, is Derek Jeter, the brand, greater than the New York Yankees brand?
There’s no denying that the Yankees will renew Jeter’s contract. But, given that his stats are at, or near, the worst of his career, determining his value will be a tricky blend of player value, projecting his decline as he continues to age, his brand value, and intangibles such as respect.
In the pantheon of Yankee greats, Jeter ranks up with them all. To say that his legacy is within the realm of Mantle, DiMaggio or Ruth is not only realistic, it seems a near given. He has been nothing short of a perfect citizen for the Yankees on and off the field without controversy, and a level of class rarely seen in professional sports.
His ability to personify the “Yankees image” has allowed him to be a perfect pitchman for large companies. He pulls in more endorsements and money than any other player in the league, earning $9 million annually through deals with the likes of Gillette, Gatorade, Ford Motor Corp, and Nike.
And while his postseason stats are a near carbon-copy of his regular season performance, he has become a highlight reel for MLB. Be it “The Flip” in Game 3 of the 2001 ALDS against the A’s, his “Mr. November” 10th inning game winning home run against Byung-Hyun Kim in Game 4 of the 2001 World Series, Jeter has been, and will continue to be, part of MLB’s indelible fabric.
So, what do the Yankees do? In looking at complete season stats, his .270 batting average, .370 slugging pct, and .669 OPS are all career lows. His 10 home runs are the lowest total since 2003, while his 106 strike outs are the 6th highest of his career.
In terms of framing what his upcoming contract might look like, you have to look at where his current contract is. In terms of total value, Jeter’s current contract ranks second only behind teammate Alex Rodriguez‘s $252 million deal that expanded into a $272 million extension that expires in 2017. The average annual value of the contract (AAV) – the total value divided by years – at $18.9 million ranks him in the top 14 players of all time. There was also a $16 million signing bonus included the deal, adding icing to Jeter’s hefty haul at the time of signing in 2001.
What Jeter, his agent Casey Close, [Yankees’ general manager] Brian Cashman and the Yankees will need to determine is, how much is Jeter worth now, and what he will be worth over the life of his contract as Father Time continues to take its toll on his play?
At 36, his age is now a key factor. The contract will most certainly have fewer years than his current contract. A 2- or 3-year deal with 1 to 3 option years in play could be possible. In terms of salary, Jeter pulled in a steep $21 million this season, after seeing $20 million each year from 2007-09. Trying to keep that intangible respect factor in play, a lower annual salary in favor of a signing bonus with the addition of incentive clauses to see if Jeter’s 2010 isn’t the beginning of a steeper decline, or even a way to help edge him closer to his 2009 numbers, and that fine balance of honoring the Captain while not going overboard is in check.
At some point, Jeter, like Mantle, DiMaggio, Jackson and a host of other Yankee greats, will dance off into the sunset. He will be forever a Yankee. How it all ends is not quite clear yet. There will likely be a well-planned, choreographed affair between two iconic brands forever tied at the hip sometime in the not-too-distant future. Surely, it will be done with class, something that seems synonymous with Jeter and his relationship with the Yankees.

David J. Berri is a Professor of Economics at Southern Utah University and the author of Stumbling on Wins.

Derek Jeter is currently in the last year of a contract that is paying him $22.6 million this year. According to ESPN.com, among Major League shortstops he ranked — out of 22 shortstops with enough at-bats to qualify — 8th in Runs Created Per 27 Outs and 10th in OPS. In other words, his pay suggests he is one of the very best players in the game. His stats, though, suggest he is no longer one of the very best players in baseball.
Such a result is not surprising given Jeter’s age. There is some question of where exactly a player’s performance peaks, but it clearly is the case that a player who is 36 years old is past his prime. And that suggests that Jeter’s performance is likely to decline further in the future. In fact, it must be the case that in the next few years, age will cause Jeter to decline so far that he will simply stop being good enough to play Major League Baseball.
This expected decline in performance must drive the discussion of Jeter’s pay. A team certainly will consider past performance in determining a player’s pay. But ultimately it’s the expectation of future performance that must determine the salary offer a team will make. And once again, we expect Jeter to offer less production. Therefore, his pay should decline.
There are two non-performance issues people might think are also relevant. First is the issue of star power. Jeter is a star, so maybe his presence on a team is worth more than his productivity suggests. Although this may be true in baseball, one should note that a study of team revenue in basketball suggests that fans respond primarily to wins, not star power. Such research suggests the Yankees shouldn’t pay Jeter just for his star appeal.
What about loyalty? Jeter has been a Yankee for his entire career. With Jeter, the Yankees have won five World Championships. Shouldn’t Jeter be paid more out of loyalty? People should remember that Jeter has been paid more than $200 million by the Yankees. So it appears that Jeter has been well compensated for his past performance. Consequently, I am not sure the Yankees owe him more money for less performance in the future.
So it looks like a declining Jeter, if he wants to stay in New York, should expect a significant pay cut. But here is the problem with this scenario. Athletes tend to be the last people to know that age has eroded their value. Jeter might believe that he is still one of the very best players in the game. Therefore, his salary demands might be quite different from what the Yankees might offer.
And that might mean that Jeter will reject the Yankees’ offer and enter the free-agent market. And that means it’s possible that Jeter will depart the Yankees and wear a different uniform in 2011. If that happens, fans of the Yankees will get to experience what fans of many other teams have seen for years. Specifically, fans of the Yankees might see a favorite player working for another team. Yes, it’s depressing. But in the free-agent era, an era where the Yankees have often thrived by taking talent from other teams, that’s how the game is played.

“If the Yankees don’t give Jeter what he perceives to be a fair offer, there are plenty of other places that the already wealthy Jeter can play.”

I may be cheating a bit with my answer, but I see the problem here as one of gathering information about what each party desires in order to foster agreement where there are strong incentives to hold out. I’d prefer to adjust the bargaining framework rather than directly attempt to reconcile revenue expectations that are largely invisible to the other side and the public. I have no doubt that the Yankees will sell more tickets with Jeter than without, and Jeter is loved by Yankees fans more than other fans. Both parties would be better off if they agreed to work together, but each side knows that it has something the other values and wants to extract that value. Despite what his detractors may say, Jeter is still a valuable player. I estimate Jeter’s play will be worth approximately $9 million to the average club in 2011. If the Yankees don’t give Jeter what he perceives to be a fair offer, there are plenty of other places that the already wealthy Jeter can play. And if the Yankees perceive Jeter is driving too hard a bargain, they can acquire shortstops from somewhere else. Both the buyer (Yankees) and seller (Jeter) have significant market power; thus, we have a situation similar to bilateral-monopoly, where there is no natural equilibrium outcome. How might I get them to reveal an acceptable settlement range simultaneously, so as not to tip the balance of power in negotiation?
I think there is already a good mechanism in place within baseball: final offer arbitration. All teams have the option to offer this type of arbitration to departing free agents. If the player accepts, each party submits a salary offer to the arbitrator at the same time. Once the values are on the table, parties are free to negotiate a settlement. If no agreement can be reached, then an arbitrator must choose one of the offers-there is no in-between compromise-after they make their cases in a hearing. Final offer arbitration would require Jeter and the Yankees to reveal their expectations and establish hard consequences if no agreement can be reached. With arbitration, both parties save face with the fans while avoiding the posturing of free-agent negotiations. Because they will want to win the case, both sides have an incentive to put forth a figure that they can defend. However, most arbitration cases never reach the hearings stage, because the extreme fallback positions encourage parties to negotiate a desirable outcome. Let’s hope that the Yankees offer arbitration and Jeter accepts, so they can hammer out a contract that will keep Jeter in pinstripes for life without the drama of free agency.