What's the Biggest Tax Mistake That Might Be Made This Year? A Freakonomics Quorum 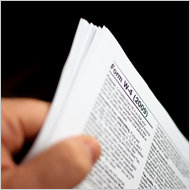 Consider the ingredients: a frail economy, a toxic political environment, looming hard deadlines and massive uncertainty in the business community – the perfect circumstances under which to write some great federal tax policy!
But tax-code writing will be done – on the expiring Bush-era tax cuts, the estate tax, the Alternative Minimum Tax, capital-gains taxes and more.
So today, in celebration of the October 15 extension-filing deadline, we thought we’d do our part to help the government avoid mistakes. We asked some smart tax people a simple question:

Here are their answers:
Joel Slemrod is a professor of economics and public policy at the University of Michigan.

The biggest possible mistake would be to lose sight of the long-term issues that surround tax policy. Given the depth of the recent recession as well as the slow pace and apparent fragility of the expansion, it is appropriate that the macroeconomic effect of tax policy changes be taken seriously. A big jump in the tax level could abort the delicate recovery.
But, fingers crossed, we will get past this cycle. And, looking ahead, we face a massive fiscal imbalance – caused by the huge excess of promised benefits from Social Security and, especially, Medicare over the taxes now in place to finance these and other programs – that seriously threatens the long-run health of the U.S. economy. The bad news is that the recent deficits, caused by a downturn in tax revenues and stimulus expenditures, make the long-term fiscal imbalance even worse. The good news is that the recent deficits are just a drop in the bucket compared to the structural imbalance we faced even before the recession. (Just kidding.) I, and many others, think that the solution should involve both scaling back the promised entitlement expenditures and taxing ourselves more. Hopefully, the deficit commission, which is scheduled to make its report in December, will agree. But don’t ask me to draw the political Google map from here to there.

“Resolving this issue is a fundamental matter of national priorities and generational equity. It should and will not be resolved in a lame-duck session.”

The big battles over tax (and entitlement) policy will not occur this year, nor should they. Resolving this issue is a fundamental matter of national priorities and generational equity. It should and will not be resolved in a lame-duck session. And yet, if this Congress does not act, all the tax cuts enacted in 2001 and 2003 will expire at the end of the year. That, in my view, would be too big a tax increase for right now. But the buzzword case for tax cuts has apparent purchase at any point in the business cycle – now to avoid strangling a fragile recovery, later to avoid sapping a vigorous recovery. The truth is that the cost to us of government programs is not measured by tax collections, but instead is about equal to the expenditures themselves. Thus, for a given amount of government spending, cutting taxes does not lower the cost, it just postpones the assignment of who will bear the costs and weakens our long-term economic prospects. Not this year, but sometime very soon, we should decide as a country how generous our entitlement programs should be and who should bear their cost. Extending all the Bush tax cuts signals that we cannot bring ourselves to face up to this reality.
The other risk of too short-term a focus is making changes to tax policy that deform, rather than reform, the system. After all, tax changes enacted with a short-term objective have a way of staying in the code for a long time. For example, if revenue is to be raised, it should not be raised by bringing the tax rate on dividends back up to the ordinary rate. If tax cuts are to stimulate economic activity, the incentives should apply broadly rather than only to certain sectors or types of investment. If revenue is to be raised, for now place the extra burden on high-income Americans who have on average achieved extraordinary income growth over the past decades while the real incomes of middle-class Americans have stagnated; while understanding that if we ever face up to the long-term fiscal imbalance, we may choose to tax ourselves more broadly.

William G. Gale is the Miller Chair at the Brookings Institution and co-director of the Urban-Brookings Tax Policy Center.

“Policy makers have already made the biggest potential tax policy mistake they could have made this year.”

Policy makers have already made the biggest potential tax policy mistake they could have made this year. Ever since the tax cuts were enacted in 2001 and 2003, policy makers have known the law would expire at the end of 2010. That “drop dead” date offered an auspicious way to galvanize a systematic effort to reform a tax system that is badly in need of repair. Instead, policy makers pretty much ignored the issue until just before the 2010 Congressional recess, when politically tinged efforts to extend some or all of the tax cuts finally began – a “debate” that was too little, too narrow, and too late.
Our leaders’ procrastination goes beyond proactive broad-based reform and extends even to the most basic issues. Congress still needs to clarify the tax law for the current year. What is happening to the alternative minimum tax this year? Will the usual “patch” be enacted to cover tax year 2010? So far, it has not been, but we’ll see. Congress still needs to enact a budget for the fiscal year that just started on October 1.
In addition to those sins of omission, Congress could pursue some major sins of commission. Making any of the 2001 and 2003 tax cuts permanent this year would be a mistake – we can’t afford it and it would feed the dangerous notion that solving the fiscal problem is going to be easy. The tax cuts that benefit only high-income households should not be extended at all, even on a temporary basis. Extending them would be bad short-term economic stimulus: as the Congressional Budget Office and others have shown, the same amount of money could be used in better ways – for example, infrastructure investment or aid to the states – to boost the economy. Extending those cuts would also be bad long-term fiscal policy; if we don’t let those tax cuts die now, policy makers certainly won’t let them expire during a Presidential election in 2012 and so they will likely become permanent, which – again – we can’t afford.
What should policymakers actually do? Start with the essentials: clarify the 2010 tax treatment of the AMT and other provisions currently left hanging, pass a budget for the current fiscal year and enact a serious stimulus package. That would at least get the necessary work out of the way, so that next January they could get to the real problem – fixing the country’s massive and growing fiscal shortfall.

Clint Stretch is a managing principal for tax policy at Deloitte Tax LLP.

” Individuals deserve a prompt resolution of a host of issues that make thoughtful tax compliance and planning difficult and, worse, invite costly mistakes.”

The biggest potential tax policy mistake for this year is the mistake of inaction. Individuals deserve a prompt resolution of a host of issues that make thoughtful tax compliance and planning difficult and, worse, invite costly mistakes. The fate of the Bush tax cuts should be addressed as soon as possible. A rush of mid-December tax-planning transactions is not desirable. An increase in withholding on middle class taxpayers in January could be harmful. Congress should address the extension of the patch for the alternative minimum tax to provide certainty for the nearly 25 million Americans. Taxpayers with large estates should be able to plan with reasonable certainty about the rules.
On the business side, Congress and the Administration should encourage businesses to move forward with investments by explicitly recognizing that the current Administration’s tax increase proposals in the FY 2011 budget are unlikely to be enacted. Congress and the Administration should commit to producing a comprehensive package of proposals to be debated, and to delay the effect of any fundamental business tax changes until 2013 at the earliest. For Congress, the path of least resistance many times is no path at all. For taxpayers, inaction creates needless anxiety, costs and lost opportunities. The economic strength of the country is dependent on sound, prompt action by government.

Donald Marron is the director of the Urban-Brookings Tax Policy Center and a visiting professor at the Georgetown Public Policy Institute.

“While politicians, analysts and the media endlessly debate how expiring tax cuts might affect taxpayers in 2011, the real disgrace is that we still don’t know what the tax law is in 2010.”

With little time left on the legislative clock, policymakers will be hard-pressed to top the tax policy blunders they’ve already made this year. Most notable is their failure to decide what this year’s tax law should be. While politicians, analysts and the media endlessly debate how expiring tax cuts might affect taxpayers in 2011, the real disgrace is that we still don’t know what the tax law is in 2010.
Will our leaders really allow the alternative minimum tax to hit 27 million taxpayers this year, a whopping 23 million more than in 2009? Did the estate tax really expire back in January, making 2010 the year without an estate tax? Will companies really receive no tax credits for their investments in research and development?
Under existing law, the answer to each of these questions is yes. Unless Congress acts, the AMT will expand its reach almost 500 percent, George Steinbrenner‘s estate will pay no estate tax, and America’s most innovative companies will go without the R&E tax credit. But in today’s world, existing law doesn’t mean much until Congress throws in the legislative towel. The upcoming lame-duck session will thus feature healthy debate about patching the AMT, retroactively resuscitating the estate tax and extending a host of expired business tax credits – all policies that would determine 2010 taxes.
Such retroactive policymaking is an embarrassment. In a well-functioning democracy, policymakers should establish the laws of the land in advance so that families and businesses can knowledgeably plan their activities. Surprises may sometimes necessitate mid-course corrections. An economic downturn may justify mid-year tax cuts, or a sudden crisis may require mid-year tax increases. But persistent retroactive lawmaking undermines the core idea that ours is a nation of law.
Needless uncertainty also creates real costs. Uncertainty about the R&E tax credit, for example, limits its usefulness as an incentive. If businesses think that it might expire, they have less reason to take it into account when planning their research efforts. That can turn a helpful incentive into a pointless giveaway.
Needless delay also undermines the IRS’s ability to implement the tax system. In 2007, for example, Congress fiddled until just before Christmas before deciding to enact that year’s AMT patch. Because of that delay, affected taxpayers couldn’t begin filing their returns until February 15, when IRS computers finally reflected the new law.
Congress has made a huge mistake by leaving taxpayers in limbo for more than 10 months. Let’s hope they resolve that quickly when they return for what promises to be a frantic lame-duck session.