When the Rolling Stones Hit the Laffer Curve 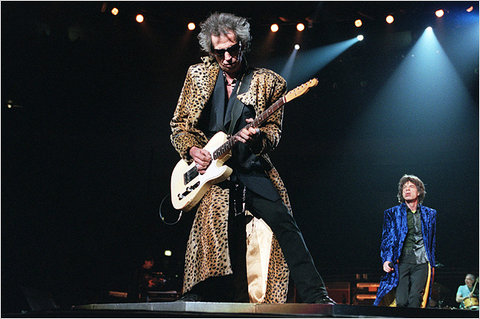 An interview with the Rolling Stones reveals some of their business and wealth-protection strategies. “The whole business thing is predicated a lot on the tax laws,” said Keith Richards. “It’s why we rehearse in Canada and not in the U.S. A lot of our astute moves have been basically keeping up with tax laws, where to go, where not to put it. Whether to sit on it or not. We left England because we’d be paying 98 cents on the dollar. [This may sound like an exaggeration, but likely isn’t.] We left, and they lost out. No taxes at all. I don’t want to screw anybody out of anything, least of all the governments that I work with. We put 30% in holding until we sort it out.”

The story of the Stones’ flight from Britain because of taxes is told a bit more fully in the recent documentary Stones in Exile, which was quite good. (Shine a Light, meanwhile, was a disappointment.)

As much as I love Keith Richards – am reading his memoir Life, and loving it as much as the critics – the likelihood is that his bandmate Mick Jagger is more responsible for the band’s business strategies. He is, as we put it earlier here, a true profit maximizer.

A lot of Canadian women thought it was because of them.

98% is, indeed, not an exaggeration. The Labour government of the 1970s had a 98% tax on very high earners (not sure of the threshold). It was abolished by Margaret Thatcher's government and remained at 40% for a couple of decades.

But, but, but...governments can raise taxes and people will just pay them! Everybody knows that!

Shine a Light is excellent. A short appearance of Christina Aguilera is not sufficient to make a film disappointing any more than a one-time post by an irrelevant TV actor is enough to make an economics blog disappointing.

So it looks like the Republicans were right...assuming that the majority of taxpayers take up a nomadic lifestyle with no ties to any particular country. It's ironic that the party that coined the term "America: Love it or Leave it" would be most likely to leave it due to tax considerations. ::rolls eyes::

Mike @5: Isn't it worth considering why a nomadic lifestyle has such advantages now? Maybe, just maybe, something is broken in our economic system.

Bill Flanagan's new novel "Evening's Empire" covers the british tax situation in the sixties pretty well. Basically they taxed the income of the up and coming individuals that could challenge the status quo with their new wealth. Those individuals left the country to avoid taxation and the threat was eliminated. The landed gentry's capital gains were never taxed at high rate thus protecting their wealth and control of the government.

The same thing is happening here. Different levels of taxation, but the result seems to be quite similar.

If you don't believe me just look at the division of wealth trends in the last 30 years or so. It's not whether taxes are high or low, it's what is taxed and right now it is highly inequitable and our society is poorer for it.

So the super rich represent the "majority of taxpayers" now?
And corporations don't need to take up a "nomadic lifestyle" to lose ties with one countries tax rate (see Google and their 2% tax rate).

Mike, I fear you're hallucinating. I don't know of any Republicans talking of leaving the country. Some Hollywood Liberals talked about that, but unfortunately stayed here.

I could believe that a 98% marginal tax rate is past the peak of the Laffer curve. What I don't believe is people who think 35% is past the Laffer peak.

Actually Penny (#10), a lot of our tax policy makes me want to leave the country. I'm not even kidding.

Every time a rich person leaves the US, the burden of our crazy spending weighs even more heavily on those who stay, since they now have to pick up the same tab but with less help. This additional burden encourages those who are still around to leave even more... it's a vicious cycle, and it's pretty rational.

Shouldn't our tax policy try to *bring in* the best and brightest, not make them want to leave? Instead we're all about protecting the unfortunate at the expense of the successful. Sorry if this sounds cold but that's not a way to cause economic growth. Sure some of the people receiving aid can get back on their feet and help the economy, but that's always costing taxpayers the same if not more $ to get them back on track... and most of the time the aid money doesn't produce anything of economic value. It's either a tie or a loss.

Rant over. I am going to go order Stones in Exile now.

What is interesting to point out is that a lot of big artists, like the Rolling Stones and U2, have their holding companies based in Amsterdam (I believe the Rolling Stones are based there since 1971), because the Dutch government doesn't charge a tax on royalties. So in effect, they only have to pay 1.6 % of their revenue in taxes.

This discussion is hilarious. Do conservatives really believe that the rich should be taxed at a lower rate just to keep them in the country?

Listen, we've seen what happens when you cut taxes. Massive jumps in debt (both in aggregate and as a percentage of GDP). That is not a sustainable solution. Supply side economics simply transfer public wealth to the wealthy.

We are currently feeling the results of tax breaks. As the wealth of the rich went up, there simply weren't enough safe places to extend credit. The result is riskier loans. With cheaper credit, everyone started borrowing and buying houses. With everyone buying the prices went up. It turns out, not everyone could afford the loans.

It turns out you can only squeeze so much out of the bottom 95%.

2.. It isn't from Rolling Stone magazine, it is from Fortune.com (see the very bottom of the article).

@#6: It's probably more that it's much easier to live a nomadic life in this day and age when air travel is cheaper and the internet makes it much easier to keep connected with the people you've left behind. That having been said, you can't really live that kind of life easily unless you're pretty rich and successful.

98% was and is ridiculous. That's not an argument for abolishing taxes. It's a give and take process that we need to constantly renegotiate. Smart, progressive taxation. Not "ridiculous overburdensome taxation" or "zero taxation."

British taxes used to make a distinction between "earned" and "unearned" income, with the latter taxed at a higher rate. This included such things as rents, interest, dividends, and the royalty income of rock stars. It certainly went as high as 95%, as memorialized by the Beatles in "Taxman" - "..there's one for you, nineteen for me..". The tax on earned income, however, only briefly reached a high of 82%.

One might reflect that the preferential taxation of unearned income in the US lately, which drove the explosive growth of unproductive financial speculation, contributed substantially to the economic situation in which we now find ourselves.

As a conservative I'm a bit ashamed to admit that I buy it. That's the most effective indictment of Bush's tax policy that I've yet heard.

I'm no fan of the income tax but it seems to me like it's a little bit odd to distinguish types of income. If we're going to tax income shouldn't we keep it simple and just tax it all the same? Why make extra work for accountants and tax lawyers?

Bob @ 14: See, here's the thing. It's not necessarily that we think the evil "rich" should be taxed less it's that we realize that they have the means to leave and take their businesses with them. Especially in a time when capital can move across borders with the push of a few buttons and a good accountant. You and many others on the left seem to want to tax the "rich" simply because they have more $$. I'd rather keep them here, encourage them to build their businesses and give the rest of us decent jobs that help them to get richer. Because I'll be better off for it.

I met a man a year ago who was selling off all of his small businesses that he had accumulated over the course of his life. He had a DIY car wash, a couple of convenience stores, a self-storage facility and half a dozen rental homes in an upscale community. Altogether, he probably had $4-5 million in assets, that I knew of. He was liquidating everything to go to New Zealand.

He wasn't exactly a big employer, but he sure as heck paid a lot of property taxes here and clearly had the ability to accumulate assets and make them productive. New Zealand is the better for it, now.