GMOs and Mother Nature? Closer Than You Think 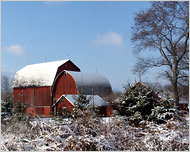 When it comes to genetically modified organisms (GMOs), one criticism stands above the others: it’s unnatural.? The idea that (unlike conventional genetic exchange within a species) genes from one species can be transferred to another fuels this perception of unnaturalness. The UK’s Health and Safety Executive, a watchdog group for worker health, explains that “genetic modification occurs when the genetic material of an organism (either DNA or RNA) is altered by use of a method that does not occur in nature.”? The anti-biotech Non-GMO Project notes that genetic modification creates “combinations of plant, animal, bacteria, and viral genes that do not occur in nature.” The Huffington Post plugged last October as “non-GMO month” on the grounds that genetic modification produces goods through processes “that do not occur in nature.”? Greenpeace has described “breaching species barriers” as “unnatural.”? Daily Kos insists that “gene splicing does not occur in nature.” In a word: frankenfood.
Well, you know where this is going.? Scientists have now confirmed what evolutionary geneticists have long suspected – nature does produce GMOs. Swedish researchers discovered an enzyme-producing gene in a meadow grass that naturally crossed into sheep’s fescue about 700,000 years ago.? “The most plausible explanation,” said Professor Bengt O. Bengtsson of Lund University, “is that the gene was transmitted by a parasite or pathogen, such as a virus, perhaps with the help of a sap-sucking insect.” The fact that cross-species gene transfer happens without human intervention in nature, however rare, provides further justification for viewing transgenic technology not as a Frankensteinian intervention into the natural world, but as yet another method of trait selection, something we’ve been doing with heroic results since the dawn of agriculture.
None of this is to suggest that there aren’t sound reasons for vigilance when it comes to GMOs.? Critics oppose the technology on many other grounds besides the perception that the process is unnatural. But the discovery that there’s a precedent in nature for transgenic technology demands that we take a more intellectually nuanced look at food production – a look that acknowledges that agriculture is, by definition, manipulating nature (and what’s possible in nature) to serve human needs. ?Whether organic, conventional or biotech, the act of farming is, as the classicist-raisin farmer-writer Victor Davis Hanson once wrote, “the elemental fight with soil, water, and living organisms to produce harvests at a profit.” To divide the precious manifestation of that fight – our food supply – into “real” and “frankenfood” insults not only those who grow and produce our food, but nature itself.