If You Can Bet on the Rain, Watch out for Rainmakers

A few days ago, the Chicago Mercantile Exchange began selling futures contracts on rain. As this Marketplace report points out, the Merc – best known for selling agricultural commodities and futures – “already sells futures for temperature, frost, snow – even hurricanes.”
As the Merc’s Tim Andriessen told Marketplace, “There’s really no science or art in terms of long-term forecasts so that uncertainty is actually what makes an opportunity for products like this.” Andriessen argues that “any business affected by weather – from farms to concert venues – could find rain futures beneficial. If that concert is rained out, the organization running the show could still make money.”
That makes sense, doesn’t it? Most of us buy insurance of one form or another. And such an offering seems impervious to human intervention. That’s a key component to setting up a fair betting market: the outcome can’t be influenced by any of the bettors.
But is this truly a betting market in which the outcome cannot be influenced by any of the bettors?
While the science is in dispute, there is good reason to believe that it is quite possible for humans to make rain. Here’s a bit about the history of rainmaking from the new illustrated SuperFreakonomics: 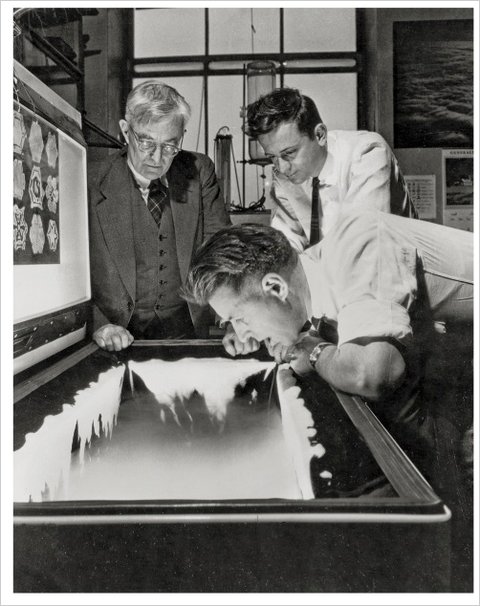 Project Cirrus, a joint venture between General Electric and the U.S. military, sought to research weather-modification technologies, including rain making. In this 1949 photo, Irving Langmuir (left) and Bernard Vonnegut look on as Vincent Schaefer tries to form ice crystals with his exhalations. Project Cirrus also tried to disrupt a hurricane by seeding it from an airplane with 180 pounds of crushed dry ice. The storm, which had been heading out into the Atlantic Ocean, veered westward and struck the Georgia coast, killing one person and injuring several more. As Time reported, a weatherman in Miami “hinted that last month’s disastrous hurricane might have been not an act of God, but just a low Yankee trick.” Ultimately, the U.S. Weather Bureau found that the hurricane had begun to head toward Georgia before the cloud seeding, and that Project Cirrus wasn’t at fault.

And, as we’ve noted a few times on this blog, there have been several recent attempts by governments (in Russia, China and Venezuela) to make rain. Some didn’t turn out as planned, producing massive snowfalls instead. But there have been claims of success, and likely will be many more attempts.
So if it’s possible to make rain, and if it’s also possible to bet on the rain, mightn’t we expect someone – be it an individual, firm or government – to try to cheat the system with the Merc’s new rain offering?
One person who thinks so is Tristan Brasseur-Kermadec. He is “fed up with all these fake business opportunities,” and so “on behalf of all those who have been (and still are) screwed by these irresponsible games,” he created a Facebook event to boycott the launch of the Merc’s rain market.