Interstate Migration Has Fallen Less Than You Think

One of the exceptional things about the U.S. is how mobile our workers are.? It means that worker shortages in North Dakota won’t last long, as workers will move there from jobless Nevada.? There’s been a lot of concern that the housing crisis has halted this important adjustment mechanism.??According to the Census Bureau, the number of people moving across state lines has plummeted in recent years.? Problem is: It’s just not true.
But you’ve got to be a true data hound to figure out just what is going on.? Fortunately, my Penn colleague (and fellow Aussie economist)?Greg Kaplan, in?a recent paper with?Sam Schulhofer-Wohl, has done the necessary detective work.? It’s a fun story of just how deeply you need to dig before you can?really trust even Census data.? And Census data are among the best we have.
The interstate migration data come from the Census Bureau question asking whether you have moved in the past year, and if so, where from.? But about one-in-ten people don’t answer the question.? Census Bureau statisticians impute answers for these folks, but how they do this imputation has changed.? What they currently do makes a lot of sense: They find someone with similar characteristics who lived nearby, and impute answers based on whether that person had moved, and where from.? But here’s the problem: Prior to 2006, their imputations were typically based on people who lived a bit further away.? Consequently, they were likely to impute that if you had moved, you had moved from a bit further away.? This artificially made it a bit more likely that they would record you as having moved across state lines.? Because interstate migration is still relatively rare, even a small number of extra moves across state lines had a big effect.
Bottom line: Much of the observed decline in interstate migration is due to a change from a bad imputation procedure, to something more realistic.? The graph below shows how much this matters.? The blue line is the official Census statistics.? You can see just why macroeconomists were so worried about a dramatic decline in interstate migration.? The red line shows the interstate migration rate among those people who actually answered the question about whether they had moved.? And when you focus on the real data, interstate migration is slowing a little, but there’s nothing dramatic here – it’s just part of a longer-run trend. 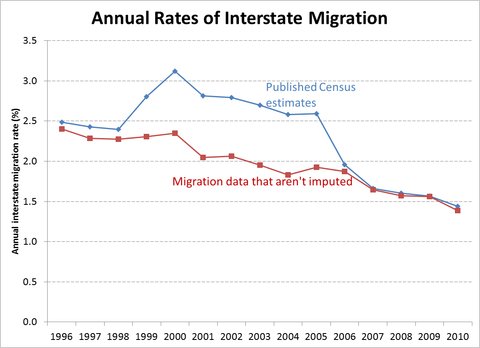 I’m all for the Census Bureau improving their imputation techniques.? But this time it led them to publish time series that are problematic in ways that are so hidden that no policy analyst could possibly have guessed what was going on. That’s a real concern.? And despite their detective work, the authors still don’t know what caused the sharp shift around 1999.
Hat tip:?Andrew Gelman.