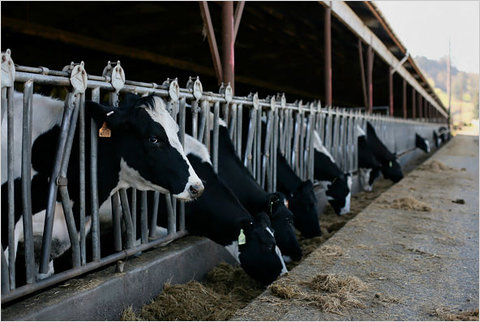 Monica Almeida/The New York Times Dairy farms: from small to huge, then back to small.

I grew up on a very small farm in upstate New York. We mostly generated food for our own use, and didn’t sell much except the corn or pumpkin or tomato surplus from our garden. We usually kept a dozen chickens and, at one time or another, a goat or two, a pig, and sometimes a cow. The cow would provide all the milk our family of 10 needed (and lots of cats too; at one point we had 23 cats, though most of them thankfully did not live indoors).
During the years we didn’t have a cow, we’d drive to a neighbor’s dairy farm about 10 miles away and draw milk from the vat into one-gallon mayonnaise jars. By the time we got home, the cream was already rising to the top. In a one-gallon jar, there would be at least two inches of cream. It was amazing stuff. My mother was an Adelle Davis-worshiping back-to-the-Earther many years before “locavore” or even “organic” were buzzwords. She felt she was committing treason – and bad parenting – whenever she had to buy milk from a store.
By the time I went off to college, that kind of little dairy farm began to disappear from upstate New York. Few of the farmers’ kids I went to school with went into farming. The economics were punishing; and consolidation was the rule.
From today’s Wall Street Journal, however, there’s an interesting report by Melanie Grayce West about the resurgence of small dairy plants in New York State:

Decades after most small dairies were forced out of business in New York, a new crop of boutique dairies is springing up in the state to produce fancy cheese, milk and yogurt.
Much of it is being devoured by “locavores,” people who try to eat locally produced food and are willing to pay up to get it. There’s also growing demand for “heritage cheese” produced by breeds of cows, goats and sheep not found in normal dairies.
There was an approximate doubling of small dairy plants in New York over the last two years, to around 80 statewide. Thirty-four plant permits have been issued this year.
A small plant is typically a family-owned farm that uses a small herd of animals, sometimes even a handful of cows, goats or sheep, to churn out premium dairy products.

Granted, 80 dairy plants in a state the size of New York is a pretty insignificant number. Unless you are one of those 80 farmers.
If indeed the boutique-farm boomlet is being driven by locavore preferences, this is a nice example of an evolving market with a demand pool that barely existed in the recent past. (Except for my mother.) That’s good news for everyone involved – as long as they don’t think they’re also reducing their carbon footprints, since they probably aren’t.