Quotes Uncovered: A Bird in the Hand 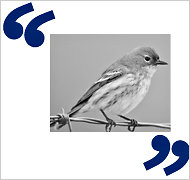 I’m back to inviting readers to submit quotations whose origins they want me to try to trace using my book, The Yale Book of Quotations, and my more recent research. Here is the latest round.
von bargen asked:

May you live in interesting times.” I’ll bet you strike out. Maybe nobody ever said it first. Is it a curse or not?

The Yale Book of Quotations traces this earlier than anyone else has, to the American Society of International Law Proceedings in 1939. It goes on to state, “No authentic Chinese saying to this effect has ever been found.” It is usually said to be a curse.
Joel asked:

“A bird in the hand is worth two in the bush.” Who is this credited to?

This is a proverb, and unlikely to ever be traced to a definitive originator. The Yale Book of Quotations gives as its earliest example John Bunyan‘s book, Pilgrim’s Progress (1678). The YBQ repeats the Oxford Dictionary of Proverbs‘ note that mentions variant wordings of the proverb in Latin (13th century) and English (15th century).
Do any readers have any other quotations whose origins they would like me to attempt to trace?