Bring Your Questions for "the Baseball Economist" 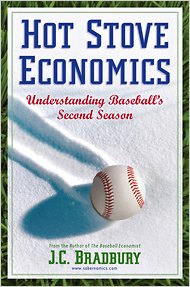 Diehard baseball fans know that the season doesn’t really end with the World Series. It just downshifts a bit, as J.C. Bradbury explains in his new book Hot Stove Economics: “The final out of the World Series marks the beginning of baseball’s second season, when teams court free agents and orchestrate trades with the hope of building a championship contender. The real and anticipated transactions generate excitement among fans who discuss the merit of moves in the arena informally known as the ‘hot stove league.'”

Chapters in the new book:

1. Why Johnny Estrada Is Worth Kevin Millwood: Valuing Players as Assets

2. Down with the Triple Crown: Evaluating On-Field Performance

3. A Career Guide from Little League to Retirement: Age and Success in Baseball

4. Putting a Dollar Sign on the Muscle: Valuing Players

5. Duds, Deals, and Caveats: What Do the Estimates Reveal?

6. Winning on a Dime: The Best and Worst Managed Franchises of the Decade

8. You Don’t Need a Name to Be Traded: Valuing Minor-League Prospects

Bradbury is an associate professor at Kennesaw State University. You may have heard him comparing baseball managers to U.S. presidents in our “How Much Does the President Really Matter” podcast. He also contributed to our “What’s Derek Jeter Worth?” quorum.

And now, just in time for the Baseball Winter Meetings, Bradbury is here to field your burning off-season baseball questions. Ask away in the comments section below and, as always, we’ll post his answers shortly.

Is there any real evidence that dollars motivate athletic performance or do most athletes try their best regardless of salary? Aren't good coaching, self esteem and other psychological motivators more effective than large piles of money?

Yes this is backwards looking, but what was your estimate of Barry Zito's value before he signed his big contract with San Francisco a few years back?

What lessons from your research can compensation managers at non-sports related businesses learn about paying their employees? Obviously a huge and open-ended question, but I would like to hear your take. Thank you.

Every off-season there are a handful of deals that teams come to regret signing within a year or two into the contract (Vernon Wells, Carlos Lee, and I anticipate now Jason Werth). Why does this happen over and over again? Do teams never learn, or is this all part of the business (and inevitable)?

Through your research, have you seen any trends of an optimal allocation of money throughout a baseball organziation (say X% of money on major league positional players, Y% on major league pitchers, Z% on signing minor league draft picks, etc)? I was curious to see if you saw any trends among the better organizations.

To piggyback off my previous question, is there an optimal mix on payroll dollars spent on pitching v. hitting (at the major league level)?

When teams that are out of the playoff hunt trade their stars as the trading deadline approaches, they often receive a handful of prospects back. I'm assuming that you have looked at and quantified the result of this type of deal many times. On average, do the #s show that the teams that trade their stars get enough value in return? Or is it the other way around, or is there nothing conclusive?

Is there any evidence "incentive" clauses act as effective incentive? Does a player whose contract says he'll get another $X million dollars if he hits Y home runs any more likely to reach that mark than a player of similar ability without such a contract?

Have you noticed a correlation between the relative size of MLB player contracts and periods of economic downturn?

Owners of lower revenue teams such as the Pittsburgh Pirates have been accused of keeping large shares of revenue sharing funds instead of investing it in the team, thus making it a profitable business despite ineptitude on the field.

What is your take on the merits/drawbacks of a salary FLOOR that requires teams to spend a minimum amount on salaries at the major league level?

I can answer one of these with simplicity and certainty: the Royals suck because they draft like [crap]. Their first-rounder list from the past 15+ years is incredibly bad. Second, the few Johnny Damons, Carlos Beltrans, Jermaine Dyes they've produced have all been shipped away immediately come contract time. Cry small market all you want, but if the Twins can do it, so can KC (and Pittsburgh...which actually makes KC look only "mediocre").

Since the values of players can be so easily quantifiable, as well as their salaries,baseball seems to give us many clear examples of where trade is not mutually beneficial, particularly after the benefit of hindsight. Doyle Alexander for John Smoltz; Bartolo Colon and Tim Drew for Grady Sizemore, Cliff Lee, Brandon Phillips, and Lee Stevens, Scott Kazmir for Victor Zambrano, Delino Deshields for Pedro Martinez come to mind. Was this because of Bad GMs, an absurdly high discount rate, or should these trades be judged relative to other options at the time?

How do the marginal cost and marginal value (to the organization) of an additional projected win each change as a team's projected wins increase? How much do these figures vary across franchises and their respective fan bases?

Is the old wives tale that a player significantly improves his stats in the last year of his contract true or just a fantasy?

How would you compare Jayson Werth's contract to Gil Meche's deal for 5 yrs, $55m with the Royals?

If you look at the last 15 years then yes, their picks have been sub par, but looking at the last 6 years you will see they have done a fairly decent job at drafting serviceable ML talent.

This latest crop of Minor Leaguers is very talented, and should provide KS with some great young talent for the next 4 years.

Does one side - player or management - clearly benefit in contracts with lots of performance incentives structured to increase in increments (that is, more per every 20 innings over 150, more per homerun over 20 etc.)? It seems that this is most common for veteran players. Does this suggest it's more difficult to predict when a player's skills will decline than it is to predict how he will improve?