Better Late Than Never: The Explanation for a Puzzling Pattern in Gas Prices 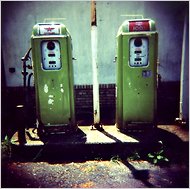 More than two years ago, I blogged on this site about a puzzling pattern that I had observed in gas prices. Here is what I wrote:

According to U.S.A. Today‘s “Weekend Gas Gauge,” the current average price of regular gasoline is $4.026 per gallon. A year ago the price was $2.945.
What I hadn’t realized was that the gap between regular gas and premium gas has also increased. Right now, premium gas is 38.5 cents per gallon more expensive than regular gas. A year ago, that gap was 29.5 cents. (In percentage terms the gap hasn’t grown, but it seems to me absolute differences – rather than percentage terms – are the right way to think about this problem.)
Why should premium gas be relatively more expensive today?

I went on to offer a few possible economic explanations for that phenomenon, none of which were particularly convincing. I then opened it up to blog readers to see if they had any better suggestions.
Remarkably, I got an email last week – 30 months after the original post – from an economist at Ohio State named Matthew Lewis, who had finally uncovered the true answer to the puzzle.
Here is what Matthew had to say:

While working on a research project I uncovered the answer to your question. Turns out it is not some strange economic phenomenon, but rather a data error on the part of AAA!
The USA Gas Gauge which you get your prices from actually uses the prices quoted by the AAA website. I have the historical data from the AAA site, and it turns out that they only accurately quote regular grade prices. AAA apparently calculates their midgrade and premium prices using a fixed and arbitrary percentage markup over regular. The markup they have used over the last 5 years is 10% (there is slight rounding error). Of course this artificially generates an increase in the absolute cent/gallon markup when prices rise, which is exactly what you notice in your column. The AAA site is simply providing bad data on midgrade and premium prices. If you look at other sources you find that the absolute cent/gallon markup in fact has not changed much even as the price level has fluctuated. There is still a general rule in most places where midgrade is 10 cents higher and premium 20 cents higher than regular.

Matthew’s answer to this puzzle led me to a couple reflections. First, I was pleased that my basic intuition that the price gap should be constant as prices changed was confirmed. I like it when I see some data that make me balk, and it turns out there was a good reason to balk. Second, it points out the dangers of a discipline like economics in which there are “many degrees of freedom,” i.e. where there are lots of different possible explanations floating around. Usually that means that an economist can come up with some rationale to explain just about any outcome imaginable. Often it won’t be the right explanation, but absent some way to disprove it, many people can be convinced it is the truth.