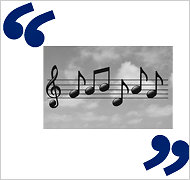 I’m back to inviting readers to submit quotations whose origins they want me to try to trace, using my book, The Yale Book of Quotations, and my more recent research.
William C. Waterhouse commented:

The question on “writing about music” seems to have reached a resolution. A column in The Online Photographer, Saturday, 17 July 2010 runs as follows: [Waterhouse goes on to report evidence that Elvis Costello credits Martin Mull as the originator of “Writing about music is like dancing about architecture,” and that Mull confirms this.]

First, I am honored to have William C. Waterhouse, a distinguished mathematician and historian of mathematics who has a longstanding scholarly interest in quotations, commenting. I have addressed “dancing about architecture” on this blog in 2009, but the answer is worth updating. In The Yale Book of Quotations, I traced the quote as far back as an attribution to Elvis Costello in 1983. But Garson O’Toole has subsequently done brilliant research on this saying. On his great website?quoteinvestigator.com, he provides a 1979 citation attributing it to Martin Mull. O’Toole also has found earlier analogues, such as “singing about economics”:

-Citation: 1918 February 9, The New Republic, The Unseen World by H. K. M., Page 63, Vol. 14, The Republic Pub. Co. (Google Books gives an incorrect date of 1969. Quotation verified on microfilm)
Do any readers have any other quotations whose origins they would like me to attempt to trace?