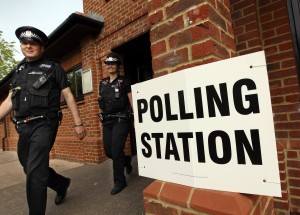 Next week, dutiful voters will head to the polls for elections. Among the jobs up for grabs are the Kentucky and Mississippi governorships, the mayorship of San Francisco, and a smattering of municipal and state positions across the country. In many of these races, incumbents are fighting to keep their seats.

In our latest Freakonomics Radio on Marketplace podcast (you can download/subscribe at iTunes, get the RSS feed, listen live via the media player above, or read the transcript), we examine the side effects that elections sometimes produce. Steve Levitt wrote about one such effect several years ago (here is the original study, and here’s an update): in mayoral and gubernatorial election years, police forces tend to grow and crime tends to fall.

As Stephen Dubner explains to Kai Ryssdal, incumbents’ incentives change when they run for re-election. They might try to perform better, hiring more police or lowering taxes. But they also might cater more to special interests, giving out election-time favors and even enabling illegal activities.

We went out in search of various election-year anomalies and found some pretty interesting stuff. For example, Jeffrey Kubik of Syracuse University and John Moran of Penn State found that sin taxes change in the year after an election: beer taxes generally go up, while cigarette taxes are less likely to increase. Kubik and Moran think legislators up for re-election might raise cigarette taxes to avoid raising taxes on other, more important constituencies (like beer drinkers). There are a lot of reasons this could happen, but legislators might rather hike those beer taxes after an election, once they’ve safely won another term.

In another paper, Kubik and Moran analyzed data from 1977 to 2000 and found that executions are 25 percent more likely in gubernatorial election years.

Election-year shenanigans are hardly limited to the U.S. Arkadipta Ghosh, a researcher with Mathematica Policy Research, found that crime rates (especially property crime) drop in India the year before an election, and spike the year after. MIT economist Benjamin Olken found that deforestation in Indonesia increases in the year of a local election. (More on that study here.) In a similar vein, Spyros Skouras and Nicos Christodoulakis, professors at the Athens University of Economics and Business, analyzed cycles of forest fires in Greece. They found that in election years, wildfires burn 2.5 times the area than they do in non-election years — a possible byproduct of building-permit regulations that forbid development on forest land unless it has been burned by a wildfire. The graph below shows the dramatic spikes in election years. 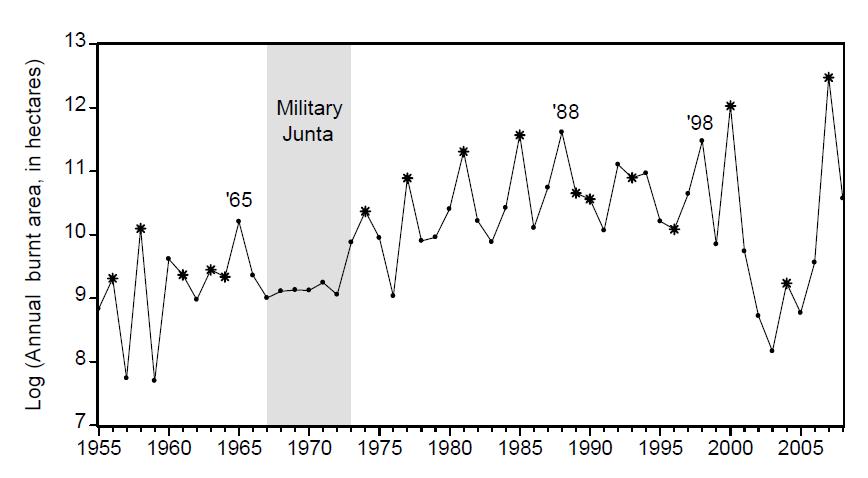 Forest fires in Greece from 1955-2008 in hectares. Stars indicate election years. Note the shaded period, when wildfires were consistently low. From 1967 to 1974, Greece was ruled by a military dictatorship, and no elections were held.

Things tend to get even weirder in off-year elections. Sarah Anzia, a political science Ph.D. candidate at Stanford, looked at teacher pay and school-board elections and found that experienced teachers get paid more in districts that hold off-cycle elections. That’s because in low-turnout elections like these, interest groups like teachers’ unions can make a bigger impact at the polls.

It’s all the more reason why this year, unlike in other elections, it might actually be worth your time to go vote.

I would love to hear you guys talk about the Utah Republican Party Caucus system. In Utah, the Republican Party dominates and uses a caucus system, which means that money doesn't matter as much as the convention. This allowed the long term incumbent Senator Bob Bennett to be unseated last year, without him even being in the primary.

I was living at Canadian Forces Base St. Jean in 1994 and there was a Provincial election in September. I wanted to vote in that election even though I’m not a regular resident of Quebec (I’m from Ontario) but when I inquired I found that I hadn’t lived in Quebec long enough to vote in the election. I didn’t give it much thought after that until the election results came in for the riding of St. Jean. On election night it appeared that the Parti Quebecois candidate had won with a margin of 17 votes out of about 25,000 votes cast. Since the margin was less than 25 votes it triggered an automatic recount. After the recount it turned out that the Liberal candidate won by 7 votes. Since the result was overturned it triggered another recount and in that recount the outcome was a tie. Each candidate had received more than 12,000 votes each and it was a tie. People often complain that their vote doesn’t count but if I had been allowed to vote in that election I would have voted Liberal which would have given him a 1 vote margin of victory. Since Quebec didn’t have any mechanism to decide a tie they had a bi-election and the Parti Quebecois candidate won by a couple of hundred votes.

I work in Baltimore, MD. It appears to me that when mayoral elections are taking place, the city "hides" the homeless for the month or two leading up to the election. I have noticed the regulars on my walk into work are suddenly gone, but reappear shortly after the election.

I got into a discussion with a bar fly who used to live in a frontera town (on or between the U.S/ Mexico border).
He says that right after a NEW president of the U.S. is elected, the drug lords let all of their thugs out and start gang fights and turf wars. They stage extravagant heists and have a higher rate of discovery at the border trying to traffic drugs into the U.S... but eventually someone from the office of the president comes down and all of the fighting stops.

It is generally thought that with a new president comes a new deal...