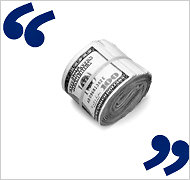 In Francisco D’Anconia‘s “money speech” in Ayn Rand‘s Atlas Shrugged (the full speech is online at Capitalism Magazine), the following statement occurs: “If you ask me to name the proudest distinction of Americans, I would choose – because it contains all the others – the fact that they were the people who created the phrase ‘to make money.'” Is that a fact? That is, was “to make money,”presumably rather than earning it or acquiring it or all the other phrases for the accumulation of wealth, actually coined by an American?

Fascinating question. I will resist the temptation to make a crack about Ayn Rand being about as good a historical lexicographer as she was a philosopher, but the fact is that the Oxford English Dictionary documents the expression “to make money” back to 1457. It was probably not Americans who were using it in 1457.

One assumes that Croesus ordered his goldsmiths to make money. One would need some context to identify the first METAPHORICAL use.....

Not to be missed: This American Life, "The Invention of Money".

Good thing Mr. Shapiro didn't want to make a crack about Ayn Rand. That would make him just one more lazy (dishonest?) academic who finds it easier to smear a philosopher than address her positions.

In fairness to Mr Shapiro, Rand held respect for facts above all else. So she lacked integrity. I never interpreted her as a God, so I feel no inclination to disparage or idolize her. I merely take from her ideas and build my system of integrity.
What is Mr Shapiro building? Or making? I really don't think this point was really the core of Rand. I believe this is just 'poetic license', and she liked the symbolism of the quote. She was a novelist foremost in the romantic tradition....sometimes prone to rationalism....or is there something else Mr Shapiro?

Cicero, de Divinatione, 1. 111 (written 44 BC): Milesium Thalem, qui, ut obiurgatores suos convinceret ostenderetque etiam philosophum, si ei commodum esset, pecuniam facere posse, omnem oleam, ante quam florere coepisset, in agro Milesio coemisse dicitur. ("Thales of Miletus, who, in order to confound his critics and show that even a philosopher could make money, if there is an advantage, is said to have bought up an entire olive crop before it began to flower.")

Writers make cracks about a lot of people on this blog--why spare Rand?

I'd like to know if it's true that Mark Twain said: "The unexamined life may not be worth living, but the life too closely examined may not be lived at all".

The phrase "a man without a plan is not a man" seems to have entered into popular culture through the film adaption of 'Dick Tracy' (1990). It is given as a quote from Freidrich Nietzsche, though I've never seen a proper reference; is this a misattribution?

Theoretically, it should not be possible to 'make' money, as "money" represents a theoretical amount of value; money isn't even a thing, it is merely a concept that occasionally relates to a thing. THAT thing is 'usually' called value. In the current iteration of America, the creation of perceived value is equated with "wealth".

Not a quote but an anecdote heard decades ago, can anyone trace it:?

At the turn of the century a philosopy professor asked his class: Would America accept a labor saving invention, if it resulted in 10,000 deaths a year? His class was unanimous in that we would not.

I believe it was in Readers Digest, and gave example that we would, cars result in far more fatalities.
It would seem logical to accept such an invention, like an artificial heart, only if it saved more lives. Related question, is there research on why we accept "unacceptable" risks? Thanks

I'm not sure if you were aware but Atlas Shrugged is actually a fiction novel, if you know what that is.

I will resist the temptation to point out that you didn't resist temptation at all.

Everybody else already pointed everything out, so I'll just agree with Patrick right now.