If at First You Don't Succeed …

Last fall, I saw my recidivist coauthor, Barry Nalebuff, and was struck by how much weight he’d lost. He had a clearly different body shape. I told him he looked great. Barry turned to my spouse (and coauthor) Jennifer Brown and said, “I’m doing it on my own, so I don’t have to use that [expletive] stickK.com.”
I was shocked. Not so much at the language. I’ve heard Barry drop the F-bomb a time or two. But it was so bizarre to have Barry shy away from using a commitment contract. Barry is a world-class game theorist who hasn’t only written about the benefits of commitment devices; he’s also used them to lose weight. He’s the father of the bathing suit diet. Back in 1993 on the first day of a business school course on game theory, Barry promised to teach his last class of the semester in a Speedo if he hadn’t lost fifteen pounds by then. The threat of humiliation was a pretty strong commitment, and sure enough his business students never got to see what I just saw this past summer at the pool – the sight of Barry Nalebuff in a swimsuit.
So it came as a sobering surprise to hear Barry Nalebuff express such unbridled emotion when he said he was dieting on his own to avoid using “that [expletive] stickK.com.” What was he thinking?? Of course, Barry’s cri de coeur has something to do with the fact that I’m one of the cofounders of stickK. To be my friend is to know that a stickK contract is an option.? Implicitly, I think Barry as a game-theorist was already thinking a step ahead.? He understood that if he can’t lose weight on his own, he’s going to have to take bolder action.
I never realized it before, but the mere existence of stickK is providing a service to some people who know of it but never use it. Part of Barry’s motivation to lose weight on his own is to avoid having to use stickK. I must admit that this indirect commitment effect wasn’t foremost in our minds when my cofounders and I set off to create a commitment store. But we’re happy to be of service.
Barry made this backstop benefit of stickK explicit when I asked him later about what prompted him to say what he did.? Barry, with typical acuity, said, “If at first you don’t succeed, then use stickK.” 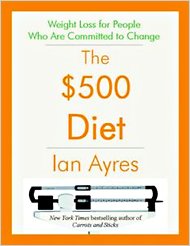 This story is adapted from a diet booklet that I’ve posted just in time for New Year’s resolutions.? It’s The $500 Diet and for a limited time you can read it for free.
Most diet books are written by physicians and scientists, but The $500 Diet is my attempt to give economics and contract law a chance to change how much you want to eat.?It’s a seven-step plan to strengthen your resolve – to help you make credible New Year’s resolutions.
Would you rather lose a pound next week or $500?
Most people given the choice would find it pretty easy to take off a pound.? That’s the first step.? Now repeat as necessary.
Of course, not everyone can afford to put $500 at risk.? But anybody can afford to risk 10 or 20 percent of their disposable income – some amount that is large enough to get your attention.? The booklet shows you how to use stickK.com‘s layers of accountability to craft a diet that will strengthen your resolve.
Most diet books obsess about what you should put in your mouth.? But information is not the problem.? You already know that to lose weight, you need to eat a bit less or exercise a bit more.? The $500 Diet is a different kind of diet plan because it doesn’t tell you how much to eat or exercise. You are smart enough-with the help of the Internet and dozens of dieting books-to figure that out. What’s unique about The $500 Diet is that it works on another dimension. It lets you set your own incentives to lose weight.
I expect that some of my colleagues will give me grief about publishing a diet booklet.? But I’m participating in a larger trend of law professors breaking the boundaries of law review writing.? My colleagues Jed Rubenfeld and Stephen Carter have written murder mysteries (see, e.g., The Death Instinct and The Emperor of Ocean Park).? My colleague Amy Chua is about to publish an amazing book on parenting, Battle Hymn of the Tiger Mother.? It turns out I’m not even the first law professor to write a diet book.? Susan Estrich beat me to the punch more than a decade ago with Making The Case for Yourself.?? The center cannot hold.