Call me a skeptic about the “peak oil” story. Human ingenuity has always found ways to produce more of, find substitutes for, or discover ways to do without a scarce resource when price signals tell us to. But if peak oil is true, doesn’t one good peak deserve another? Why not meet peak oil head on with its dreaded natural enemy: peak travel?
At the risk of oversimplification, American history in the 20th century basically comes down to four “C’s”: communications (phone and TV), computers, cars and contraception. Though a graph showing the impact of the pill on American mating habits might be more interesting, here’s one I pulled together on the colossal growth of driving over the course of the last century: 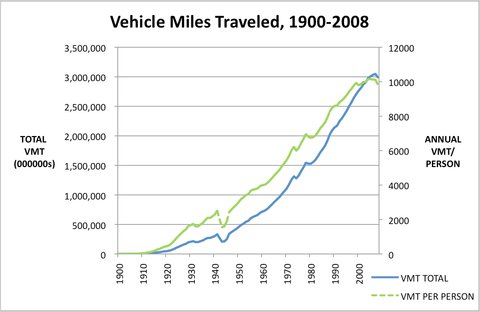 All this motion may cheer you, since travel is a prerequisite for many, many of the things that make life worth living: work, school, shopping, social life and entertainment, to name but a few. On the other hand, the graph tells a negative story too: with all that driving has come lots of congestion, crashes and CO2.
If the latter problems are your focus, there is hope: take a look at the far right side of the graph. The growth in VMT/person started to tail off in the year 2000, and contrary to everything history has taught us, from 2005 to 2008 VMT/person actually dropped each year. As of 2008, we were driving about the same amount per person that we were in 1998. (2009 numbers aren’t in my data set, but stats from the Federal Highway Administration show the phenomenon continued, with 2009 per capita travel below 2008 levels.)
Does the stagnation in car travel in the 2000s represent a statistical quirk, or evidence that a century of automania is coming to an end?
A pair of papers-one from Robert Puentes and Adie Tomer of the Brookings Institution, and one from researchers Adam Millard-Ball and Lee Schipper of Stanford University-have come out on this phenomenon. With their help, what can we speculate about the causes for and durability of the mysterious phenomenon of peak travel? More next time.
(HT: Brad Morris and Melinda Burns of Miller-McCune)